With a backstory that involves dinosaurs, gorillas, and rhinos, Rhino Rilla Rex doesn’t make much sense on that count, so it’s best to just consider it an experiment of sorts. Once you stop trying to figure out how the three creatures got together, you can just enjoy the dark jungle-like graphics used both on and off the reels.

The selection of low and major symbols that are used will show off both images of gemstones arranged in paw-like patterns, and images of the three beasts in stacked form.

We’ve seen it often in the past, but Rhino Rilla Rex doesn’t come from just one developer. While it was created by Crazy Tooth Studio, Microgaming also had a hand in its release. They came up with a nice selection of features, but they didn’t do as good of a job on graphics. It’s something that I’ve noticed before in their slots, that they could invest more time in their graphics. 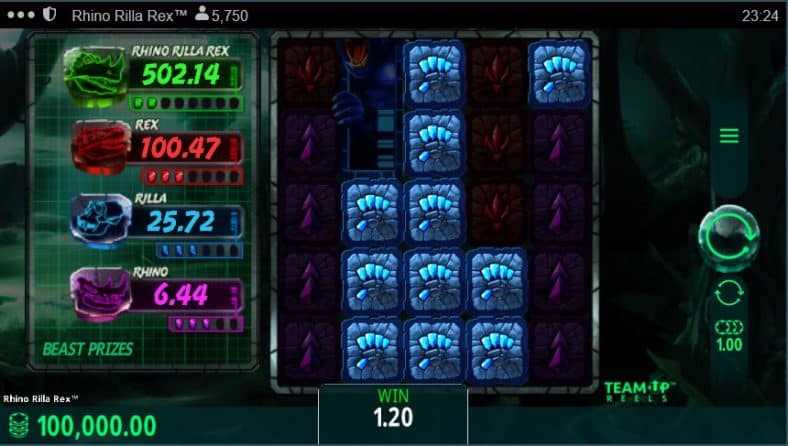 Rhino Rilla Rex follows the lines of a regular betting range, one which starts from $0.25, and may go up to $12.50. It’s nothing unusual, that kind of limited range is typical of a lot of modern slots, particularly the ones that are volatile and can also pay very well.

The combinations of Rhino Rilla Rex form both ways, and they use a total of 3,125 ways to win across 5×5 reels. This means that you need at least 3 matching symbols to appear on consecutive reels, but they can start either from reel 1 or 5.

Whenever you get 3 or more of the premium symbols with the animals, and they’re fully visible on the reels, a mechanic called Team Up triggers. The game combines the triggering symbols into a single one, a hybrid. Depending on its type, it gives you a multiplier.

The next stage involves a separate game area, where you can get tokens, multipliers (up to 5x when combined), or cash prizes. They each have a role to play. Cash prizes are collected, multipliers improve their value, and tokens get collected in special meters.

There is a variant for the Team Up, where a triggering premium symbol also comes with a gold frame around it. You get the bonus spins instead, where there is a chance to retrigger the feature through special symbols.

As for the tokens that you can collect along the way, those you use to fill up special meters on the left side. There are four types of tokens, of different colors, each one corresponding to a different jackpot. Eventually, you can win a prize ranging from 5x to 500x the stake (Rhino Rilla Rex Jackpot).

Rhino Rilla Rex doesn’t go crazy trying to deliver big wins for the player. 5,000x the round’s wager is the most that it will pay, and that’s a prize that most would be satisfied with, without being excited about it.

Given the high volatility nature of Rhino Rilla Rex, it’s even more important that you find a version of this slot that has the max RTP of 96.20%. Lower values can also be selected by casinos, and they’re not nearly as good.

Rhino Rilla Rex is unusual, and that’s about it. While the features can be interesting, ultimately it doesn’t have the same motivating top jackpots as other slots do, and the graphics are below average.