NetEnt is not the type of developer that would disappoint when it comes to game design, and Riches of Midgard: Land and Expand is a great example of what their slots usually look like. With a Viking themed design, and with cute cartoon-style characters taking over its main symbols, the game only offers 3 reels and yet it looks better than most slots with 5+ reels.

On its 3×3 reels (with the option to expand them), you will discover images of three of the Nordic’s deities, Odin, Thor and Freya. Additional top symbols give us a drinking horn and a big piece of meat. As for the others, they’re the expected Royals, but they have a decent-looking design as well. Thor’s Hammer is going to be the scatter.

It’s NetEnt that you have to check out, if you want to find this game at any online casino. It’s going to be in good company, one of many high quality slot machines that this developer has launched over the years. Great graphics, plenty of cool features, a decent mix of low and high volatility content, their collection appears to have it all.

Riches of Midgard: Land and Expand 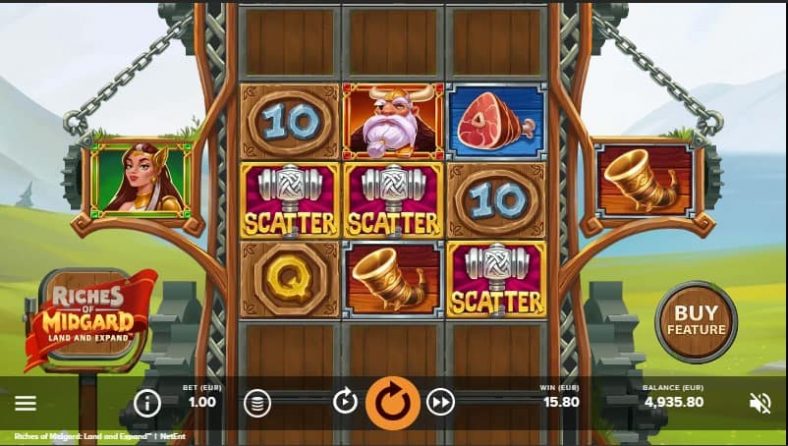 What you need to do, is simply select the amount which has to go into the next spin. $0.10 is going to be the lowest you can go, while $200 is the highest.

The regular game area will feature 3×3 reels with 9 lines. Combinations form with 3 matching symbols, found on just as many reels and on active lines. Keep in mind, the game area can expand, so you can play with 29 lines at most.

Riches of Midgard starts you off with just 3×3 reels, but you will notice that single symbol positions are placed to the left and right of the game area. Those are not used for regular combinations. Instead, they are relied upon to bring about the reel expansion feature. It happens whenever you get matching symbols in both Hot Spots (they spin at the same time as the rest of the reels), and at the same time you also see them on 2 or 3 regular reels. The result is a Respin feature, during which the reels expand. High value symbols are the only ones available for the base game Hot Spots.

As the reels expand, so do the triggering symbols, which end up covering all positions on their columns. The Respin occurs for the reel that doesn’t have them. If they’re on all reels, then you get paid immediately.

One more feature is going to be found, the free spins. With 8 rounds to obtain, the requirement is for Mjolnir (Thor’s Hammer) to land scatters on all three main reels. In this mode, you play with the fully expanded game area, and 29 ways/lines present on 3×7 reels. 2 extra spins are added for each new scatter appearing after that.

For the free spins, the first Hot Spot can now get wilds, which are only used in combination with any symbols found on the second Hot Spot. Symbols of all types can now appear in the Hot Spots.

It’s not something you’d expect from a slot where reels expand, but the actual potential for Riches of Midgard is fairly low. 435X the stake is not a big payday, but on the other hand they’re not going too high with the volatility either. We’re seeing low to medium volatility, so casual players will find it easy enough to stomach. RTP is OK as well, at 96.03%.

Riches of Midgard looks like fun, is certainly different from other 3-reel slots, and for a casual player its action is going to be enough. Veterans will not be happy with its top rewards though.