The Rio de Janeiro carnival is once again a source of inspiration for developers, and there are usually a couple of new games which are based on it every single year.

It’s the case now as well, and we’re looking at a slot which has the usual high end graphics from Red Tiger. Beautiful women are among its symbols, as are parrots, shakers or cocktails, along with bowls of fruit or Royals. 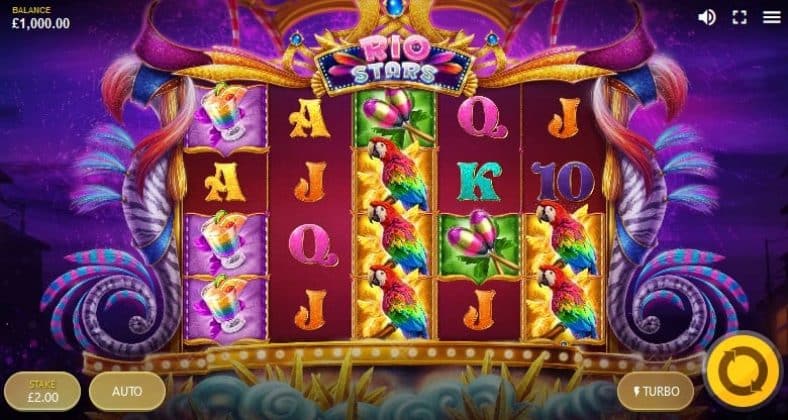 Red Tiger, a developer which has always designed great-looking slot machines, has only lately really tried its best to offer a great list of features as well. They have a lot more slots with higher volatility these days, and in 2019 they were acquired by NetEnt, a sign that they got the attention of the industry’s big hitters.

$0.10 is the smallest amount that a player can wager in Rio Stars, and it’s going to deliver 30 active lines that round. The other end of the betting range is at $40, and the same number of lines will be provided then.

You are forming winning combinations via 30 lines, in game area with 5×4 reels. The game will use various random and regular features to help make the action interesting, but it’s not the type that will be tough to figure out.

Rio Stars offers us wilds for one, and what’s great about them is that they pay the game’s biggest rewards as well. Besides acting as replacement symbols, they will form their own wins, each combo paying 30x the stake at most.

The random features are going to kick in fairly often, and there will be drums played at times, to signal the possibility of them triggering. You will have several potential features to help out here.

One of the random features takes the form of a multiplier, as high as 20x, which is to be used on the next winning round that you get. It will be available to you, for as long as it takes for that next win to come. Multipliers can even accumulate, if there are additional such features triggered until you get your win.

Another one takes the form of a 3×3 wild, a mega symbol that will appear anywhere in the game area.Rio Dancers is another option, which adds extra wilds in random locations.

Carnival Reels is the fourth potential feature, which gives you one spin with a guaranteed win, where low value symbols are not present.

There will also be scatters present on three of the reels, and through them you can get a random number of free spins. One of the random modifiers, which I’ve mentioned above, will kick in for every single free spin.

Where Rio Stars doesn’t do as good of a job, is payout wise. The promise is that the game will offer rewards of up to 2,000x the stake, which would be fine if the slot had low or even medium volatility. In a slot with high volatility, such as this one, there isn’t enough there to make players pay attention. Add to this a low RTP, of 95.73%, and Red Tiger doesn’t give us lots of reasons to try out this slot.

Rio Stars has a couple of things going for it, such as its features and even the graphics quality. It lacks the right top prize and RTP though, to make it an interesting choice for a player that likes it when the rewards match the risks that are taken in such a game.