If you would like to find out how her majesty the Queen of England handles her finances, then you can enter the famous Royal Mint, a place where coins for Great Brittain are made. Of course, they will not show you the entire process of making coins, but you could leave the place with a large amount of them in your pockets.

Royal Mint Megaways is Big Time Gaming’s latest release, functioning under the Megaways game engine, offering 6 standard reels and two extra ones, giving you the possibility to benefit from up to 117,649 ways to win. Of course, the Reactions feature is available, as well as the Free Spins feature with an unlimited win multiplier. However, there is one more extra that can help you win big, called the Heartstopper Enchanted Free Spins, triggered with the little help of Gold Bars. 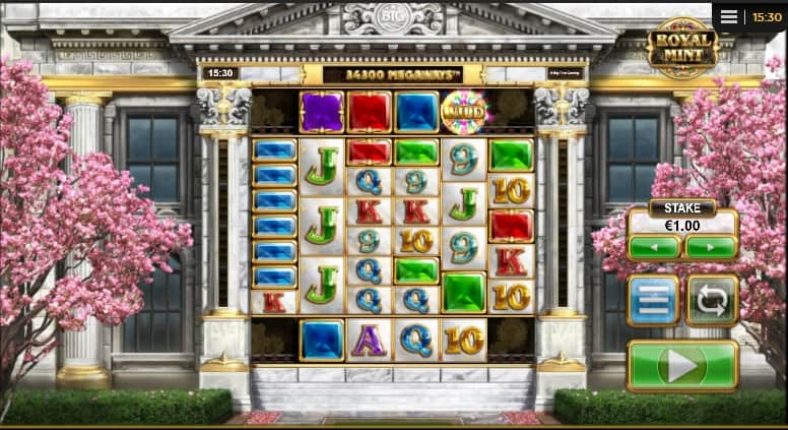 Big Time Gaming was established back in 2011. The Australians have been fighting bravely to make an impact on the iGaming industry and find their place among the industry giants. In our humble opinion, they have been quite successful in their efforts.

Thanks to the partnership with CORE Gaming, BTG video slots have gone mobile and are getting more and more popular on daily basis, despite the fact that there aren’t a lot of them on the offer, at least for the time being. In this case, we believe that they are focused on the quality, rather than quantity.

As probably most of you know, the Royal Mint was first located in the Tower of London, because it was easier to guard the treasury from that position. However, the coin making company was moved and now is positioned in Wales. Once you start playing the 2020 release, you will find yourselves at the very entrance of the Royal Mint, but you will not be able to enter the establishment.

Despite the fact that coins are made here, they are nowhere to be found on the reels. Instead, BTG decided to use gemstones, like Amethyst, Ruby, Sapphire and Emerald. Playing cards represent low-paying icons. The Wild will substitute for all regular symbols and will appear only on the extra reels. You will need at least four Scatters to trigger freebies.

Those of you who enjoyed Big Time Gaming products before will see that the rules of the game are quite standard. The 2020 release features six reels and up to 5 cells can appear on a single reel. Also, there are two extra reels, whose symbols are added on reels 2, 3, 4, and 5, so up to 7 icons can appear on central reels.

Thanks to the Megaways game engine, the game offers up to 117,649 ways to win. Land three or more matching symbols on adjacent reels, starting from the leftmost reel, and you will start winning payouts. The Reactions feature will remove all winning symbols from the reels and add new ones. Betting starts at $0.20 and the biggest wager cannot go over 20 per single spin.

The Mint Scatter will help you trigger the Free Spins feature, just land four or more of them on the reels at the same time. Four Scatters will get you 12 freebies, while each additional Scatter will bring 4 extra free spins, meaning that you can get up to 20 freebies at once.

During the feature the unlimited win multiplier is active, starting at 1x, but going up bu 1x after every reaction. Scatters appear only on extra reels during freebies. Three of them get you 4 extra free spins, while every additional Scatter is worth 4 additional free spins.

Every three Scatters that you land will get you 1 Gold Bar. Once you collect 40 of them, a Scatter will appear on every spin before the feature is triggered. Get 4 or more of them on the reels to trigger the Heartstopper Enhanced Free Spins with an enhanced unlimited win multiplier. During these freebies, the win multiplier starts at 2x and goes up by 2x after every reaction.

To get the biggest possible win, you will have to trigger freebies and boost the win multiplier. Once you manage to do that, you can land up to 41,300 times the bet in a single free spin.

The base game is not as generous since it comes with no win multipliers, so the biggest win here is set at 1,880 times the bet. Amethyst offers the most, 50 coins for six of a kind, while other icons pay much less.

Royal Mint Megaways is quite similar to other Big Time Gaming titles, offering the Megaways game engine, extra reels and the Reactions feature. The Free Spins feature and the Heartstopper Enhanced Free Spins feature are a neat addition to the story since it will be very exciting to boost the win multiplier and win up to 41,300 times the bet in a single spin.

We did not like the fact that BTG used gemstones instead of coins, but we are sure they had their reasons for doing so. A little bit of ingenuity can be seen in Royal Mint Megaways, but still, it is fun to play.