The tale of Aladdin is all but universal at this point. The prince of thieves and his trusted genie going on grand adventures, and winning the heart of an actual princess? The story has seen many movies, cartoons, and yes, slots! Yggdrasil’s latest venture certainly isn’t the first game to try and bring the familiar tale to life. But it’s certainly one of the best iterations, we have to admit!

And we promise, it’s not only because the graphics are so good. But it would be a horrible injustice not to mention how beautiful this release looks! Every animation is superb, and so fluid we’re a bit baffled we’re finding it in a slot! If Sahara Nights was an animated movie instead of a game, we’d probably be the first ones to watch it. The captivating background, cool symbols and great animations come together to create something fantastic.

On top of that, we get some basic, but very engaging special features. Expanding Wilds and free spins are the only two bonuses you get, but they’re done very well. 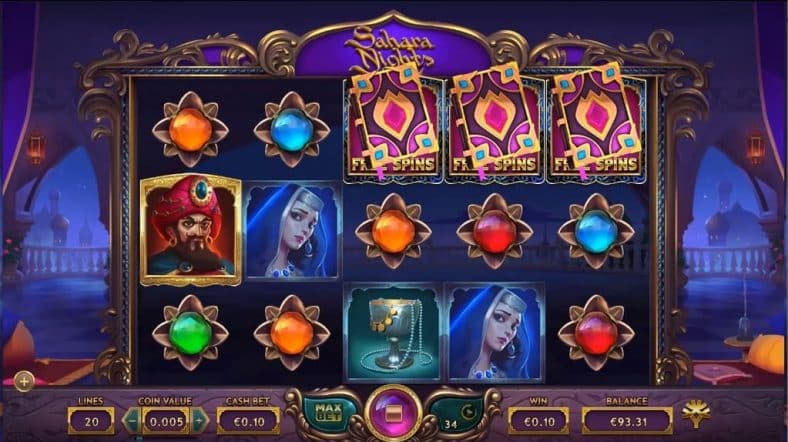 Ever since it was originally founded in 2013, Yggdrasil has been making waves in the industry. Despite their smaller size compared to the industry’s giants, they’ve delivered on frequent and high quality releases! Though they’ve originally started with slots only, the company has recently began expanding into table games, diversifying their offer. In 2019 alone, they receives two awards: EGR’s Innovation in RNG Casino Supplier, and the International Gaming Awards’ Innovator of the Year.

Sahara Nights is played on a 5×3 board with 20 fixed paylines, which pay left to right only. You cannot turn individual paylines on or off to adjust wager. The only way to change your stake is to increase or decrease your coin value. This allows players to set their total bet between $0.10 and $100.00 on each spin.

Yggdrasil always go out of their way to gently adjust their user interface so it fits the game. That way, the looks always match up! This, alongside the great functionality of their layout, makes them the standard other developers should look up to.

In contrast, their Autoplay options are a bit too barren for our tastes. You’re only able to select how many auto spins will be played – between 10 to infinity. If you want to set additional Autoplay options, you have to go into the settings through the menu.

As we’ve already discussed, the graphics are some of the best we have ever seen from Yggdrasil. This honour is given specifically because of how great the animations are! It’s not something we can really convey in text, no matter how much we praise their fluidity. It’s something you have to see and appreciate for yourself! If only the background was animated, too…

Symbol designs clearly have a lot of effort put into them. The human characters very obviously display their personalities: the cocky thief, the uncertain princess, and the proud father. Then, there’s the dagger and chalice, both of which are ridiculously detailed! The four gemstone icons are filler, and they’re the only ones that haven’t swept us off our feet.

Three, four or five Scatters will earn you eight, twelve or sixteen free spins, respectively. Each Scatter comes with an attached cash prize, which offers a slight initial boost. But if you land a five-of-a-kind Scatter win, you get 1000x your total stake alongside the sixteen free spins! It is also possible to win more free spins and cash prizes by collecting additional Scatters while the bonus is still active.

Wilds can only appear on the second, third and fourth reel. They can expand, but don’t always do so. Instead, the expansion only happens if it will lead to a winning combination being created! During free spins, once a Wild lands on the second, third or fourth reel, it will become sticky. That means it will remain in place until free spins end. And if you get all three Wilds, you’re rewarded with two free spins.

This medium variance release has a jackpot worth 3500x your total stake. Sahara Nights has an RTP of 96.2%, which is above the current industry average.

We could go on and on about what an amazing slot this is, but we think we’ve thoroughly covered that already! Simple but effective special features ensure you won’t be bored anytime soon. And thanks to a solid paytable, you can look forward to a good jackpot, too! The beautiful visuals come as a cherry on top of an already delicious cake. This may be one of Yggdrasil’s finest games, so make sure to check it out!