Sevens High Ultra is not as much a brand new game, as it is an upgrade for an older slot machine from Quickspin. As such, the graphics have remained the same as in the original slot, and the symbols used are inspired by the classic fruit icons and Sevens that are so popular in older games. It’s a modern design though, and it will not feel dated at all, despite its theme.

You have four fruit symbols that pay the same for both modes, using images of cherries, plums, limes, and oranges. We then get the symbols that pay a different amount across the two modes, and here there are Silver Stars, Golden Bells, and the Sevens colored in red, green, and blue. A golden Wild logo is also present, as are Wild versions for all three Sevens.

One of the more popular developers of online slot machines in recent years, Quickspin is present in dozens of countries and hundreds of online casinos. They’re easy to find and play, and I think you’re going to love many of the 90+ games they’ve developed since 2012. It’s one of the many excellent developers that originate from Sweden. 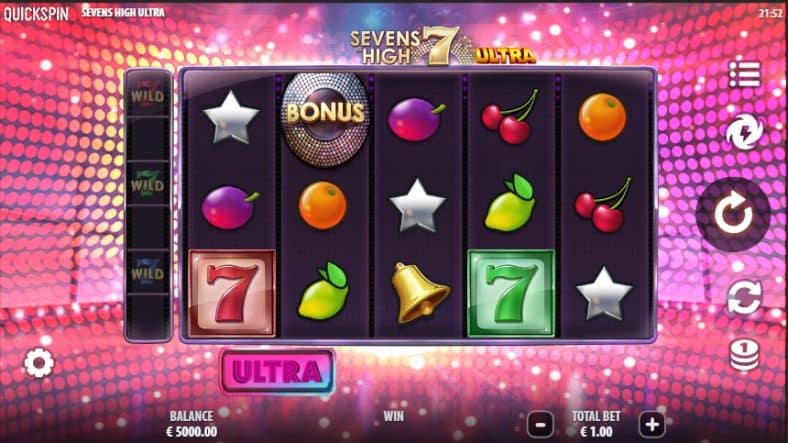 Using the stacked coins button, you can access a bet menu that lets you select the amount that will be wagered next round. The 13 bet values listed there go from a minimum of $0.25, to a maximum of $100.

Sevens High Ultra has 5×3 reels and 25 active lines. As the game starts, you get to choose between the Classic and the Ultra versions. The latter is the riskier one, since its volatility is high, but the rewards for medium-high symbols have been increased considerably, so for some players it might be worth it.

As you play, you will form winning combinations on its active lines, and this will influence a special meter that’s displayed next to the game area. If you manage to form wins, then respins will trigger for all symbols, until no more combinations are formed. Should additional combinations form, the respins will continue and the meter will fill up by one additional position.

Regular wilds are present on the reels, and they are both substitutes and some of the highest paying symbols available inside. These will pay up to 100x the stake when they form their own wins.

For every two consecutive wins obtained during respins, the game will transform one of the high-paying Sevens, into a Seven Wild. After 6 consecutive wins, all Sevens are now wilds as well, and their wins have received a serious boost.

The Bonus logo is part of the scatter symbol, which you need landing three times, in order to get the free spins. While in the Classic version this gets you only 10 free spins, the Ultra version offers you 10 to 35 rounds (for 3 to 5 symbols). Both modes will be retriggered if another set of scatters lands.

In this mode, you can also get 2 extra spins whenever you transform a regular Seven into a Wild version.

As this is an Ultra version of an existing game, they’ve given the payouts a boost, so now you can get up to 6,768x the stake in a single round. The RTP is lower in the Ultra version though, only 96.06%, while the Classic one has a 96.54% return.

Sevens High Ultra is a welcomed addition, since it gives more options to players that love this particular slot machine. I don’t like that the RTP has dropped by quite a bit as well, which makes the Classic the more desirable option if you don’t mind the smaller rewards.