Skulls UP! is Quickspin’s first release in 2020 offering a virtual journey to a secluded tropical island. Players will join a gang of pirates looking for gold buried under the palm trees and experience hot action provided by Flaming Skull Wilds, Flaming Respins and Flaming Free Spins.

Reels will grow to increase bet ways up to 1,944 and thus facilitate more and bigger wins. Board Quickspin’s ship and it may take you to hidden treasures worth more than 3,000x your stake. 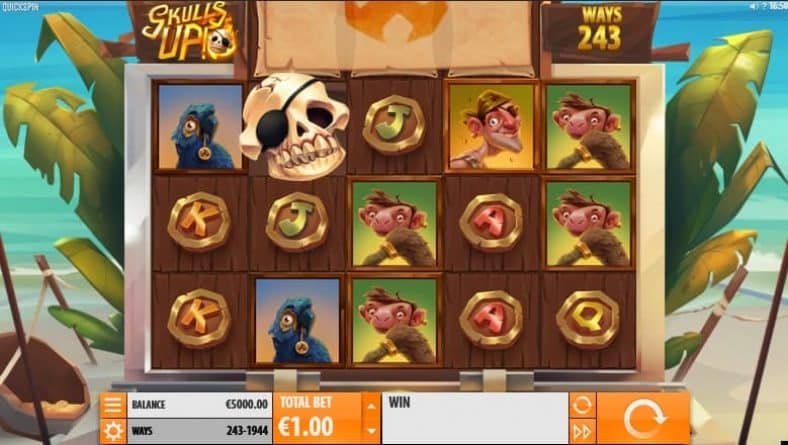 Not long ago, Quickspin products used to be a nice-to-have addition to a casino’s portfolio banking on Microgaming or NetEnt slots to draw in crowds. In the meantime, this creative game studio which operates since 2012 managed to create a loyal fan base of its own.

It may have something to do with the 2016 acquisition which made Quickspin part of Playtech but also the fact that the developer always puts quality before quantity. Highly successful Big Bad Wolf was soon followed by numerous other fantastic titles using interesting themes, incorporating innovative features and demonstrating an impressive attention to details.

Skulls UP! is a 5-reel video slot with the number of ways ranging from 243 all the way up to 1,944. Set your total bet between €0.10 and €100 and start clicking the Spin button or select Autoplay to spin the reels for you. One can choose to play up 1,000 spins automatically and use advanced options to set loss and win limits which will interrupt Autoplay.

The backdrop designed as a beach scene with palm trees gentling swaying in the wind and a calming Caribbean tune together create a holiday feel.

However, there’s no time to lounge about while soft sand warms up your body and the sound of waves lulls you to sleep. The gang is ready to start digging and can’t beging before reels are set in motion.  Male and female pirates, monkeys and parrots pay the highest amounts while appropriately designed Royals create low-value wins.

There are two different kinds of Wild symbols, a regular Skull Wild and a Flaming Skull Wild. Both can appear only on the 3 middle reels and each is capable of interesting tricks performed in addition to the usual substitute act. Whenever a Flaming Skull Wild shows up, it will launch the Flaming Respins feature and increase the height of the reel by 1 symbol position.

Scattered Chest is another special symbol willing to land only on the 3 middle reels. A simultaneous appearance of 3 Treasure Chest symbols triggers the Flaming Free Spins bonus with the Flaming Respin feature included. The player wins 6 Free Spins during which enlarged reels caused by re-spins won’t be reduced to their initial size after re-spins end.

What’s more, Skull Wilds will continue to increase the height of the reels even outside of the Flaming Respin. One can win 2 additional free games for each reel that grows to 6 icons in height.

Skulls UP! slot offers a theoretical return of 96.26% and it’s highly volatile; wins are modest and rare during the base game with more substantial amounts paid during the bonus round. The max win is capped at 3,650x the bet.

Although we’ve already seen a good number of pirate-themed slots, Quickspin once again managed to make the familiar feel new and exciting. However, Skulls UP! is unlikely to appeal to fans of low variance games. Flaming Skull Wilds are reluctant to join the party and it may also take a long time to land 3 Chests needed for launching free games.

Consequently, one is bound to experience numerous non-winning spins with occasional modest payouts before (hopefully) getting their hands on real treasures. Although we appreciate the quality of Quickspin’s newest title, we can imagine players getting discouraged at the sight of their balance slowly but surely melting away and choosing to look for an alternative.