There isn’t much of a theme in Star Clusters Megaclusters, but then again that’s not something that I’m expecting Big Time Gaming to offer. As usual, they do as little as possible design wise, and we’re once again looking at various colored gems as the slot’s main symbols. They change colors and shapes, but there is still not enough variety there, and the quality of the design leaves a lot to be desired as well. 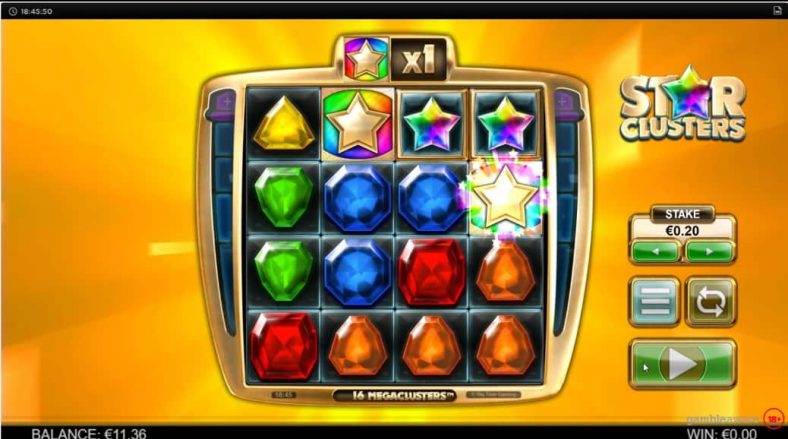 This one’s a slot from Big Time Gaming, one of the most popular developers in recent years. They have innovated several times before, and they’re well known for their Megaways engine, which they’ve now licensed to several other developers. Megaclusters is another unique system, which they’re now launching with Star Clusters, in the hopes that it will be just as popular.

Placing your bets should be easy. The Stake option is present, and it allows you to select a wager between $0.20 and $20, for each spin.

At its core, the game allows you to form winning combinations through a cluster mechanic, where you need several symbols of the same type next to each other, so that they can group up and pay you. The better the symbol involved, and the higher the number of positions occupied, the most valuable the top jackpot that results from this. You start off with 4×4 reels, so a total of 16 symbols.

First, a word about the Megaclusters system. It combines the regular cluster pays, with a mechanic which allows each winning symbol to split into four smaller ones. As you now get 3 additional symbols in a position previously occupied by only 1, the number of symbols is higher and the new clusters that form can be bigger as well. Each winning cluster is removed and replaced with a smaller cluster of 4 symbols, hopefully bringing around new wins. Once the round is over, and no new wins form, the game area resets to the original 4×4, and you start over.

Among the regular features of Star Clusters Megaclusters, you will encounter the wild, which will take part in new clusters that are next to it.

Get 5+ winning reactions to trigger in the slot, to trigger free spins. You start off with 2 as a base, and then 1 extra for every reaction that you got over the initial minimum required of 5. The game area now expands, so you start with 8×8 symbols. You keep using the Golden Wilds and multipliers that were active in the triggering round, and you can take the value up to 10x.

The payouts are as impressive as expected, with the most that can be delivered being 23,000x the round’s stake. The volatility is better than I thought it would be, only a medium to high, despite the excellent rewards possible inside. They made sure to give us a good RTP as well, which is expected to come in at 96.54% in the long run.

I think that the new Megaclusters mechanic will prove to be just as fun as the Megaways, and it’s certainly a game to be checked out by anyone that has experience with BTG’s high volatility titles. It offers more of the same, along with an interesting new gameplay system, which is sure to once again revolutionize the industry.