In the Wild West category, games with great graphics are easy enough to find, and yet The Bounty doesn’t manage to leave a very good impression. With awkward graphics wherever the main symbols are involved, it manages to do a much better job when it comes to the Royals, which are placed on actual playing cards. Besides the images of the Royals, we also find a series of characters, with sheriffs and outlaws present, alongside badges and bounty symbols.

This one’s one of the many new slots from Microgaming which are actually being designed by someone else. Snowborn Games is the company responsible for its development, an independent studio which made this slot available as an exclusive on the bigger company’s platform. 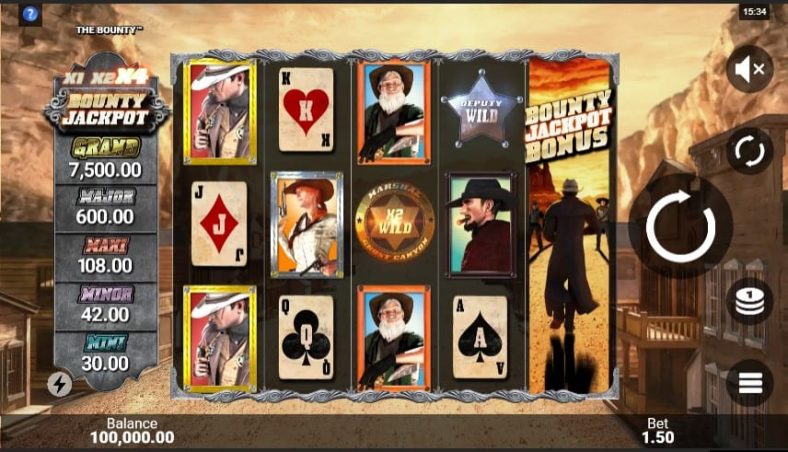 As I just mentioned, there are 15 lines available. The game area has 5×3 reels, and to get paid you will need winning symbols appearing on the same line, and from left to right in consecutive positions. That part is easy enough, the game doesn’t have any unusual mechanics for you to worry about.

Substitutes are going to be used in the game, and they are available in both a regular variant, and in a multiplier version. The regular Sheriffs Badge is colored in silver, while the 2x multiplier is bronze. Both will be useful as replacement symbols, but the latter will also double the wins in combinations that it contributes to.

Another one to pay attention to, is the Ambush feature. You are going to need three scatters for it, all landing at the same time and on the last three reels. When that happens, you are getting 8 free spins, where the multiplier is 2x to start with. Get special symbols to land after that, and you can get boosts to the multiplier (+1x from each dynamite) and number of rounds (+1 per bullet). There are no upper limits there, so you can get paid incredibly well (up to 5,000x).

It doesn’t stop there. The Bounty includes a Bounty feature, which will incorporate fixed jackpots. A special Bounty symbol needs to land stacked and fully in view on the last reel. Should that happen, you get 10 free games, and you need to collect Wanted posters of a certain type. Land 6+ and you get their jackpot. It could be one of five potential prizes, ranging from 5x (Mini) to 1,250x the stake (Grand). Multiplier posters are also available in the game, and they can apply multiple times, so once again we hit the 5,000x limit with what’s possible inside.

I like where the game is going with its payouts, and also that there are a couple of different ways to get there. 5,000x the stake is not that special these days, way too many slots have been paying that much. However, I do like that the volatility is only medium-high, meaning that it’s not quite as risky of a slot as one might think.

I’m also OK with the long-term Returns which have been calculated in its case. 96.08% is enough to make it a good pick.

The Bounty suffers when it comes to graphics, and you will have a very easy time finding games which do the Wild West theme a lot better. However, it makes up for that part, with its features and potential rewards. It does its own thing in those areas where it stands out, it doesn’t just copy others.