Diamonds are being stolen all the time in slot machines, it’s one of the things that robbers tend to go after in such games, along with bank vaults.

We’re going to Paris for this one, to an art gallery where a famous diamond resides. Its name is Pink Dawn, and the main character of this game, Jewel, is trying to get her hands on it. The game will use symbols which are appropriate for that story, including here the Pink Diamond, Jewels, Diamond case, Gold Bars, Royals between 10 and Ace, plus the wilds and scatters. 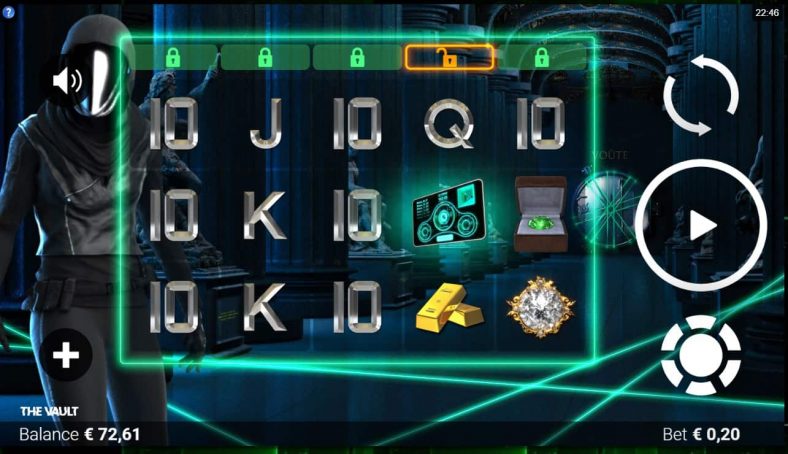 Just like we’ve seen in a lot of other games that Microgaming has released over the last year, this one is also a collaboration with a smaller studio. Snowborn Games is the developer that has worked on this game, and offers it as an exclusive on Microgaming’s platform.

The betting system is straightforward. There is a betting range of $0.20 to $20, which corresponds to a game area with 20 active lines. This allows for up to $1 line bets to be used.

As for the game, it’s just as easy to start with. The 20 lines I just mentioned, are placed on 5×3 reels, and this combination is one of the most common these days. It’s interesting feature wise, but not complicated, so you will figure it out easily.

The regular W wild symbol is the one that you’re going to notice making appearances in the base game. Used as a replacement, usually you get it in new combinations, to which it can contribute. Sometimes though, when up to five of these wilds land together on the same line, they pay as much as the jackpot symbol (100x the stake per line).

Another feature that The Vault promises, its 10 free spins get triggered as a result of 5 scatter symbols landing on the reels. Their use of multipliers will turn these spins into something special. It’s already interesting that you start with a 3x multiplier, but then you also get boosts to it, as each special symbol adds 1x to it, while also giving one more free spin.

The reason why the game needs at least 5 scatters to get you the free spins, is that it also helps you out a bit, provided that you got at least 2 such symbols. A Re-Spin feature will trigger then, with the triggering symbols locked, while others change. The target is to land more scatters, and hopefully get to the five required for the feature.

The game’s top rewards are decent, for the kind of experience that it offers. 5,000x the stake is something that you will find in games with High volatility, and The Vault is definitely one of those. At the same time, I think you will appreciate that it has the 96% RTP which signals its fairness. The vast majority of the good games we get these days will offer at least that much back to players, on average.

Ultimately, The Vault is a game for veteran players, those that can stomach its higher volatility, in exchange for a chance at its bigger payouts. It’s not going to give those players as much as other slots with high volatility though, in terms of features and potential.