The theme in use for Ticket to the Stars is particularly interesting. It’s a mix of science fiction with present day and retro-style graphics, but the look is definitely a modern one. The story follow a space travel company, with pilots of spaceships and stewardesses being some of its characters.

You can add elements like champagne bottles on ice, or various colorful gemstones, and you can pretty much get the idea of what is waiting for you inside. I loved the design of the slot, it shows off Quickspin’s skills in this area perfectly.

Ticket to the Stars 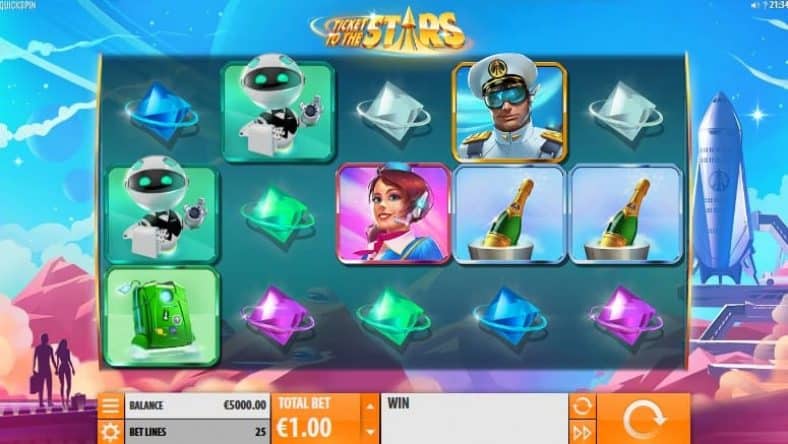 A developer which appeared and exploded just in the last half decade or so, Quickspin is based in Sweden, a country which has seen quite a few excellent developers pop up over the years.

They’ve designed impressive slots so far, ranging from the likes of Wild Bears, to Goldilocks or Big Bad Wolf, and with Ticket to the Stars they’ve outdone themselves once again. One of their major strengths seems to be the design quality in their slots, as graphics always seem to be spot on.

As this is a game which relies on regular lines, the wagers are going to follow them, and have a total bet range of $0.25 to $100. The amount which will go into each one varies between $0.01 and $4.

There are some things which make the game interesting, and a little bit more special, but overall this isn’t that different from other slots. The Cascading Reels are always fun to have around, as they often bring you more wins in a single round, and the graphics are well enough designed to add to the game’s appeal.

Stacked wild symbols are among the major features that you can expect to get along the way. They can be quite helpful in the creation of new wins, particularly when managing to cover the full reel. You can form winning combinations directly with these wilds, or you can have them just as substitutes.

Ideally though, you will want to get to the free spins stage. It requires that you first land 3 to 5 scatters somewhere on the reels, and then the game triggers 15 to 25 spins for free. The feature has a multiplier meter, which doesn’t have a limit.

For every 3 wins, the multiplier goes up by 1x and 2 extra free spins are added as well. The mix with Cascading Reels and unlimited multipliers proves hugely successful in this case, and at this point those wins of up to 10,000x are possible.

The presence of those unlimited multipliers helps turn the game into an exciting pick, and under the right conditions it’s going to be capable of paying as much as 10,000x the stake. Given the wager size, this makes it the type of game which can pay somewhere around $1,000,000.

It’s a High volatility release, obviously, but that doesn’t mean that it can’t give back a decent amount to its players. The 96.52% RTP is as good as what you can get from slots with smaller jackpots, but more frequent wins.

A game with gorgeous graphics, a unique space-inspired theme, huge jackpot potential and decent RTP, what more could you want from a slot machine? Ticket to the Stars seems to have it all.