Every so often, slots manage to actually teach us something brand new. And in this collaborative effort between Microgaming and Pulse 8, we had the pleasure of learning about China’s Lion City! It’s a settlement in eastern China which was flooded in the 1950s when a large dam was built. The city’s architecture and roads are still visible beneath the water to this day!

You can see that the developers did their best to bring this setting to life. The background image is set within a cave. And judging by all the water leaking onto the reels, the lake hiding this ancient town is right above it! The animations are pretty cool. Nothing that will blow your mind, but still above average. Lots of effort, as you’d expect for an idea this good!

The special features are where things start getting a bit more contentious. All bonuses are awarded through the use of Microgaming’s Rolling Reels special feature. The more consecutive wins you score, the more bonuses you unlock! High paying symbols turn Wild, and at some point you receive multipliers which apply to all subsequent consecutive wins! 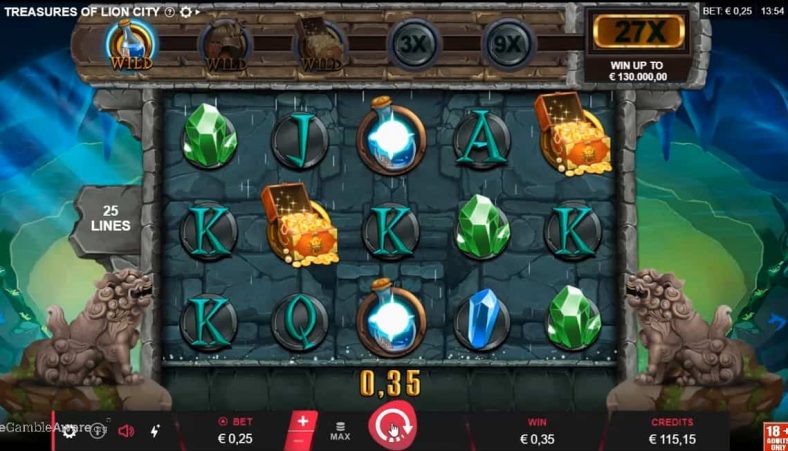 Microgaming is one of the few iGaming developers who have stood the test of time. This online gambling giant has been and remains one of the most popular software providers, having created countless classics players enjoy to this day. In recent years, the developer has relegated themselves to a publisher role, offering games made by other developers under their wing.

Pulse 8 Studios is a brand new software provider which has partnered with Microgaming. While they don’t have many releases under their belt, they have a strong team of game development professionals with an Asian appeal. Can they meet the high requirements set on their shoulders?

Treasures of Lion City is played on a 5×3 board with 25 fixed paylines. Gamblers can adjust their total bet by tapping the plus and minus keys, or by tapping the Bet button itself. This allows gamblers to directly change their bet size and bet value. You can wager between $0.25 and $25 on each spin.

Pulse 8 chose to borrow some elements from Microgaming’s layout. But at first glance, it will look completely different! All the buttons are cleanly labelled, and we like the black, red and white colour combo this user interface has. There’s definitely potential here!

The smaller developer has even implemented a detailed Autoplay menu! You can select the number of auto-spins, set a win and loss limit, and set the stake at which all auto-spins will be played. Nothing mind-blowing, but still miles ahead of their parent company.

Icon designs are a neat mixture between precious gemstones and traditional Asian symbols. We’re usually not huge fans of traditional Asian icons, as they tend to be overused. But they fit the theme nicely here, and they’re not obnoxious. The only symbols we are mildly annoyed by are playing card royals, which we feel should have been swapped out for more Asian themed icons.

After every win, the Rolling Reels bonus activates. It makes all symbols which were part of a winning combination disappear! Existing icons will fall down to take their place, while brand new ones appear on top. This allows for multiple consecutive wins while paying for a single spin.

This slot takes Rolling Reels, and builds an entire bonus on top of that core idea. With each consecutive win, the Win Meter above the reels fills slightly. And when you reach a certain amount of chained wins, you unlock a bonus! These special features only last as long as you continue chaining multiple wins. Once the winning streak stops, the Win Meter and all of its goodies are reset, and have to be unlocked again. Using the Win Meter, you can turn certain high value symbols Wild, and activate multipliers.

The game has a medium variance, with a maximum jackpot worth 2600x your total stake. The RTP for this Pulse 8 release is 94.20%, which is almost two percentage points below the current average!

While we loved almost every aspect of Treasures of Lion City, the low RTP was a factor we could not get past. The way the special feature is organized is also quite grindy, which doesn’t mesh well with the medium volatility this slot offers. If these two elements are adjusted, this game has potential to be amazing.