If you’ve played Microgaming slots before, or if you do a simple search for the name of Wild Catch, you might be a bit confused about what’s going on. The developer is launching its second slot machine with this exact name, but it’s several years apart, and this new title doesn’t appear to have much in common with the former, with the exception of the fishing theme.

They turned it into a game with a big game area, 5×5 reels available, along with 50 active lines, where the symbols are all theme inspired. I loved seeing only symbols that belong there, ranging from smaller value options which show off tackle boxes, artificial flies, fishing hooks, to various people fishing, and then there are a couple of feature symbols as well. 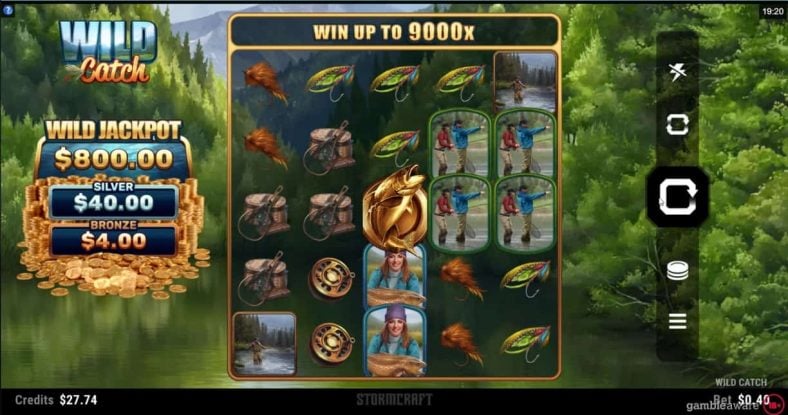 It’s a game that comes from both Stormcraft Studios and Microgaming. Stormcraft is the developer, and Microgaming gets the game exclusively, as a slot machine provided by a content partner, so they end up advertising it as their own and promoting it heavily. It’s a type of partnership that has created quite a few games already, as exclusive content for Microgaming’s platform.

You have 5×5 reels, but only 50 active lines, so it might be a bit difficult forming combinations, at times. You still need the standard 3 or more matching symbols to get paid though, and they still have to show up in certain fixed positions.

Though it might be difficult to get them, once winning combinations are formed in Wild Catch, a Rolling Reels mechanic will trigger immediately after. Removing winning symbols from the game area, the feature will replace them with new symbols, and with some luck this can mean additional combinations forming. For as long as new wins keep forming, the Rolling Reels will keep doing their thing and getting you paid.

Wild symbols are also available, and they use the image of the Wild Catch logo. These are substitutes, which you use as part of new combinations.

Splashing Wild is a random feature, which can occur when you get a wild on the reels. It transforms the wild then, and cover one of the three middle reels with stacked wilds. If wins come, then the wild becomes sticky for the Rolling Reels as well.

The major feature of Wild Catch is the free spins though. Triggered via 3 to 5 scatters, the feature is accompanied by excellent payouts of up to 250x the stake as well. Once the feature begins, there are three types of free spins that you can get, though you start with only one version, and you unlock the other two in time.

Crystal Lake is the version that you start with, which has 15 free spins and up to 10x Multiplier Trails that go up as Rolling Reels trigger. Emerald Creek has only 10 free spins, while the Multiplier Trail is now from 3x to 15x. Finally, Golden Rapids has the best rewards, with up to 25x Multipliers, but only 5 free spins.

While going through the free spins, the Growing Wilds are going to get bigger as you advance, getting 1 to 3 extra positions each round.

In a slot machine where the volatility is High, finding a jackpot that makes it all worth it is a must, and Wild Catch does well here, paying up to 9,000x the stake. RTP is also good, at 96.30%.

Wild Catch is a better game than the original Microgaming slot with this name, but with its high volatility, it might not be an option that everyone will enjoy.