It’s a sequel for another Wild Chase slot machine, and just as before, the action revolves around a burglar that is running away, after a successful heist. The previous game of the series had us going to Europe, while this one is obviously taking us to Japan. It’s just as beautiful of a game as the first slot, with modern graphics and all-themed symbols present.

On its list of symbols, you will find several characters, male and female, along with diamond rings, gold bars, diamond bags, expansive watches and champagne bottles. 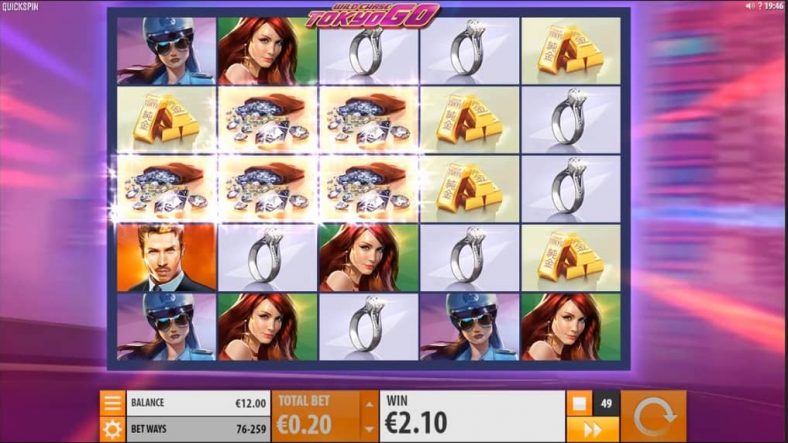 Yet another developer that’s based in Sweden, Quickspin has been around since 2012, managing to launch over 60 slot machines since then. They’ve done very well with their features and graphics, and the slots they’ve released so far have been highly enjoyable. A couple of examples of slots from their collection, which they’ve recently released, include Sticky Bandits, Razortooth and Rapunzel’s Tower, all quite popular.

There is no real connection to the number of lines which are in play, but Wild Chase: Tokyo Go will allow you to select a bet for the round, and it will be in a range of $0.20 to $100. It’s their typical betting range, you see it in most slots.

Wild Chase: Tokyo Go has 76 ways to win when you start off (3-3-4-4-5 symbols), but you could end up with as many as 259 lines eventually, as the game area expands to the maximum size of 5×5 reels. Winning combinations will easily form as a result, and the payouts will keep coming, as the game doesn’t stop until you get a non-winning round.

The main feature here, which you’re going to see trigger quite often, is called Moving Reel Respin. You get it when a winning combo forms, and you will notice the reels starting moving to the left. As they do so, the game area expands, with smaller reels being removed and replaced with 5-symbol high ones. These respins will continue to trigger and expand the game area, for as long as they result in winning combinations. It’s a huge feature for the game, and out of its RTP, about 43.11% will go to the Respins.

If the 4th respin brings you a win as well, then the game triggers a Super Respin. You get all ways to win and the maximum size game area, with winning symbols locking in their current positions. Once no new winning symbols come, the feature ends.

The game’s wild symbol will rely on the game logo, and it will be used in any combination that is formed, as a substitute.

You have only an OK target here, with the game’s rewards reaching a level of 2,757x total stake. Since we know the available bet values, the top jackpot can reach $275,700. It’s only OK because the game is medium to highly volatile, and I’d prefer to have a juicier target in such a slot machine.

Even with the medium/high volatility, the game will have a good Return to Player, and at 96.54% the slot machine can be considered to be fair.

Wild Chase: Tokyo Go will have quite a bit to offer, and it’s especially interesting because of its features and the way it was built. It doesn’t offer big enough payouts for me though, at least not for that medium to high volatility.