The Wild West is one of the themes that developers never seem to tire of, but in this case they actually found a new angle to use, so it’s got something extra for its players. Love appears to be one of the things noteworthy about this game, using images of both men and women on the reels. In most respects, this is going to be a typical slot machine dedicated to the Western genre.

Wild Wild Romance has its first six symbols with Royals, each one made out of wood and in a different color. We move on to images of piles of gold bars, a safe, the Saloon Girl, Female Sheriff, Robber, and Male Sheriff.

Microgaming launches several slot machines each month, but this is only possible because they’re not the ones doing the actual development. For this particular game, they had Aurum Signature Studios develop it. A couple of slots where the two collaborated, include A Tale of Elves and Book of Mrs Claus. 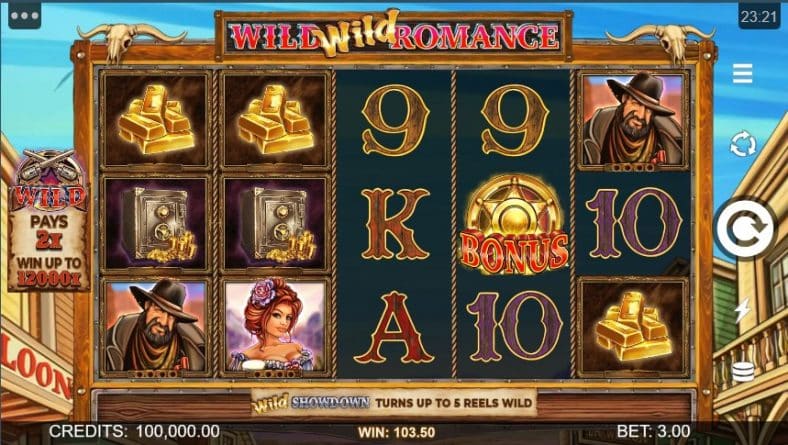 You’re going to find a regular system with 5×3 reels to spin, but the nice thing about it is that it allows for winning combinations to form whenever there are enough symbols going left to right. 243 ways to win are active.

The symbol with the two crossed revolvers, along with the Wild logo, is obviously the one that you’re going to use as a substitute. It’s a multiplier wild, which means that all wins it participates in will be worth twice as much. Don’t expect a wild to replace a scatter though, it’s not going to happen here.

Wild Showdown is a powerful feature, but it’s completely random. When it does come up, you get up to 5 wild reels from it, so the potential to win for that one round will be very good.

For many, it’s the free spins that will be the slot’s best feature. You get several versions for these, but only the first one is unlocked initially. The other types of free spins can be chosen later on, once you’ve triggered the feature 5, 10, or 15 times. To actually trigger the feature, you need the Badge Bonus symbol landing scattered, 3 to 5 times (it also pays up to 200x the stake when it shows up in large enough numbers).

The payouts possible in Wild Wild Romance feel typical for a Microgaming release, offering over $236,000 for those that can afford the max bet. The actual return on your investment is going to reach 12,150x the stake, which is pretty good in a highly volatile release. I’d mention the RTP as well, which goes up to 96.80%.

Wild Wild Romance has a theme that many will likely enjoy, and it comes with powerful features and big-enough rewards to be worth considering.