Another Egyptian-themed video slot is coming to us from Red Tiger Gaming’s creative kitchen. Wings of Ra is a five-reel, ten-payline video slot where all wins pay adjacent. The 2020 release is taking us to ancient Egypt, where we will meet the famous Tutankhamun and Cleopatra, which are the two main characters of the story.

Players can benefit from Mystery Coins, which appear on the reels during the base game and turn into one randomly chosen regular icon. Also, during the Free Spins feature, Mystery Coins will help you remove low-value icons from the reel grid. Playable from $0.20 per spin, the Red Tiger Gaming product boasts very good graphics and a fitting soundtrack. 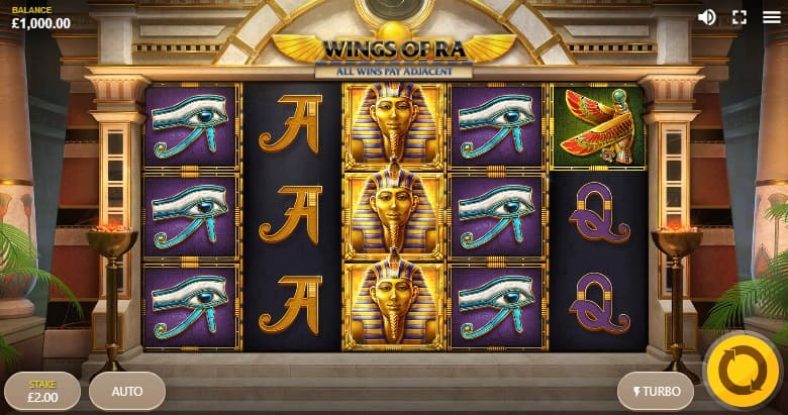 Red Tiger Gaming was founded back in 2014 by a group of veterans from the iGaming industry that “live and breathe casino slots”. Their video slots boast crisp graphics and most of them offer plenty of fun and rewarding additional features. Of course, Red Tiger Gaming offers other casino games, including Baccarat, Blackjack and Roulette. Up until now, Red Tiger managed to build their name among the industry giants.

Like in plenty of other video slots with a similar theme, there will be a Phoenix and the Eye of Ra. Playing cards are used for low-value icons. Instead of the Wild, you will have a Mystery Coin, on which there is a Ruby, and it will turn into one randomly chosen icon. The blue Scarab is the Scatter that triggers the Free Spins feature.

Usually, Red Tiger Gaming titles offer quite simple rules of the game, and that is also the case with the 2020 release. The Wings of Ra video slot features five reels, three rows and benefits from 10 fixed paylines. Here, all wins pay adjacent, meaning that you can land three or more matching icons anywhere on a payline, they only need to be on adjacent reels. Every spin will cost you 20 coins, but the coin value is something you can alter, so players can bet from $0.20 up to $20 per single spin.

During the base game, Mystery Coins will land in stacks and reveal the same instances of a randomly chosen symbol, thus helping gamers land winning combinations more easily. However, they have another role during the Free Spins feature.

As for the maximum possible wins, the 2020 release is capped at 3,000 times the bet per single spin, or a little bit more over that. Look for the members of the royal family for big wins.

Tutankhamun offers 300 coins for five of a kind, while Cleopatra will get you 150 for the maximum combination. The Free Spins feature is where you can expect big wins, since low-paying icons will be gradually removed from the reels. Wings of Ra’s RTP is 94.7%.

We had the pleasure of testing plenty of video slot themed after ancient Egypt and we can say that, in our humble opinion, Red Tiger Gaming did not deliver a game that will stand out from the crowd that much. The theme is very common, as well as the symbols that populate the reels.

The special features incorporated are standard and can be found in plenty of other games. We do not like the fact that the 2020 release does not offer Wilds and we think that Mystery Coins is not a good replacement. Also, it will take you time before you manage to remove all low-paying symbols from the reel grid, so you can expect bigger wins in the end of the Free Spins feature.