It’s a slot from the Gold series, and it’s taking us to North America this time. Black River Gold appears to put Kane in the role of an oil prospector, though other symbols on the reels will involve a Sheriff’s Badge, Guns, Whiskey, Chokers and Royals. 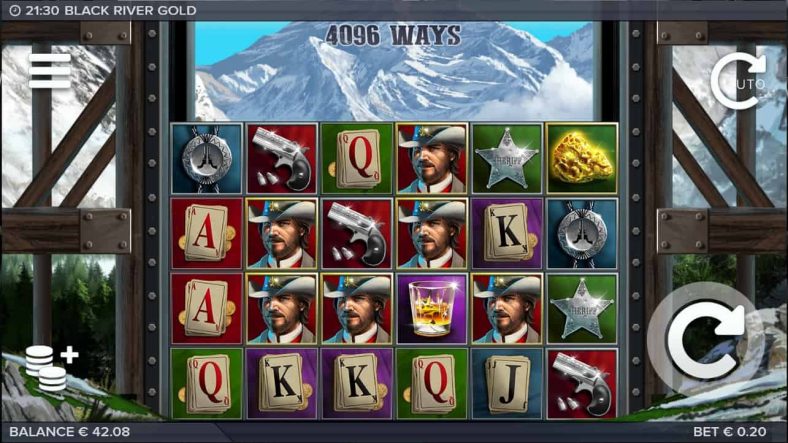 You are looking at a release from ELK Studios, one of their Gold series slot machines. These are some of their most popular games, taking the hero Kane across the world, in search of treasures and adventures. The company itself is not big, but they’re known for their high quality slot machines.

You’re going to have to select the bet for the upcoming spin, with the total amount being worth $0.20 to $100. As this developer always has the same betting system, you might know already that the figure you select will always have 100 coins in it, with values of up to $1 for each one.

You get a slot machine with ways to win, quite a few of them actually, as even the base game offers 4096 chances to form combinations across 6 reels. Up to 262,144 ways to win can become available at times, and we explain how that is possible, below.

You start off with a fairly large game area as it is, with 4096 ways to win available initially, but you only go up from there, and as cascading reels trigger and change some of the symbols on the reels, you get additional rows as well. From 6×4 reels, you get to as many as 6×8 reels, and up to 262,144 ways to win can be unlocked eventually.

One of the important features for the game, the big symbols are going to show up sized anywhere from 2×2 to 4×4, so they’re able to cover a lot of positions on the reels. Add to this the fact that they incorporate a Revolver feature in them, with symbols found underneath being loaded into its cylinder, as bullets. Get all six bullets in, and then the Revolver gets transformed, becoming a wild of big size.

Compass symbols are also great to have here, as these will transform certain symbols next to it, into extra wilds. It depends on the direction that the compass points at. Even the compass can be transformed into a wild, provided that it gets to the bottom row of the game area.

A big portion of the game’s potential is going to come from its free spins, which you get whenever 3 to 6 of the scatter symbols appear in view. Based on the number of symbols that triggered the feature, it will have 10 to 25 rounds to give you for free. At this point, you can get the game area to expand, without ever resetting back between rounds. Add the sticky wilds as well, and the free spins will prove to be the game’s most exciting time for most players.

There is good potential in this game, pretty much as expected since the volatility is also quite high (9 out of 10 rating). You get rewards of up to 5,000x the stake, at most, which would still mean up to $500,000 cash. I’m satisfied with most of these figures, and I appreciate that the RTP is at a decent level, of 96.10%.

Black River Gold builds on top of an already successful series, and adds something extra to a collection that is popular. With free spins that have big potential, and with the Revolver feature adding something new and fun as well, the game has plenty to offer.