As unusual as it might look like, Bompers sports a classic theme as its core, and you can see this in its line-up of symbols. Of course, the actual design is quite a bit more modern than what you’re used to seeing in such games, so that’s a plus for it. A big game area, which can even expand, will hold 6×4 bubbles of sorts, inside which you will discover those classic icons.

On the list of symbols, there is the B logo as the bonus, a W logo as a wild, along with Lucky 7s, Bar logo, Horseshoe, Four-leaf clover, Watermelon slice, Orange, Lemon and a couple of Cherries.

ELK Studios is a respected developer, which constantly releases slot machines that get people’s attention. As you can see, it’s not always a unique theme that’s implemented, but even so, the game is still worthy of attention. 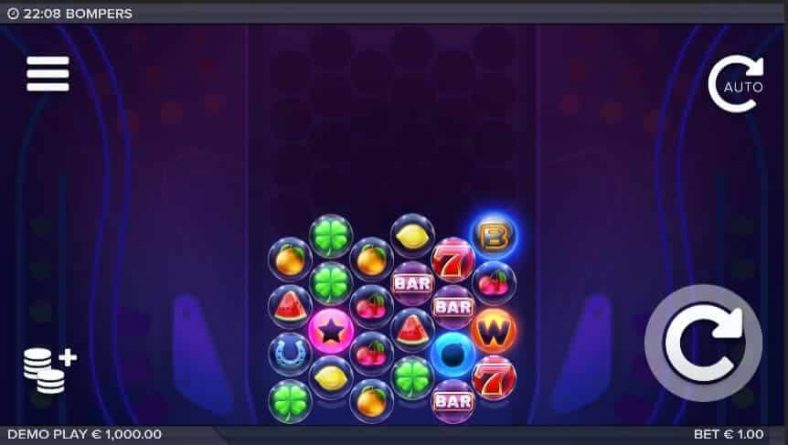 One of the things that the games from ELK have in common, is the betting system. 100 coins are part of it at all times, and the total value for them is between $0.20 and $100. Betting strategies are also available in these slots, allowing the game to change wagers automatically, based on the outcome of spins. This is entirely optional.

Using ways to win, you need 3 to 6 matching symbols, on as many reels, to get a combo formed. Not that unusual, even though there are 6 reels with 4096 to 262,144 ways to win here, particularly once the game area expands.

I’ve already mentioned how wins are formed, via ways to win. It doesn’t stop with the formation of that first winning combo though. An Avalanche mechanic will trigger as a result, which takes away the symbols which were part of the win, and then brings new ones in the empty locations. Keep forming wins this way, and Avalanches continue as well. The only symbol which doesn’t go away, is the Shooting Star, which will just move towards the left, sliding towards the lowest empty position it can find.

As you go through avalanches, there is a reel expansion mechanic as well, which adds rows to the top, until you get to 8 symbols per column (up to 262,144 ways to win from 6×8 reels).

A simple-looking W logo, black against a fiery orange, will serve as the usual substitute, a symbol which can get next to regular symbols, to form wins via ways to win. It’s never used as a replacement for a feature symbol.

Shooting Stars are symbols which can appear at random, and will move upwards when they find room. If it reaches the top of the game area, it forms a cluster of 7 symbols, using wilds and regulars for it.

Mystery Bombs can land and will explode, turning symbols nearby into a single type of payout symbol. You can get two bombs to explode, and turn regular symbols into wilds in overlapping positions.

Bomper symbols may appear, up to 5 of them, and these will be sticky for the entire round. Symbols hit them when they slide across, and they get collected in a meter. Eventually, you can turn a Bomper into a sticky wild.

To reach the 7 free drops which the game promises, you need the B logo symbol appearing scattered on three reels. You retrigger this feature in the same manner.

Bompers is one more fun and unique experience that ELK Studios has designed for its players, definitely a plus for their collection. I’m not a big fan of the somewhat low RTP, but it’s not bad enough to make players skip it.