We’ve seen several slot machines in the Break da Bank series, but this is the first time that a Megaways version is included. Break Da Bank Again Megaways is its name, and it’s going to be a familiar sight for many of the players that have tried the other games already. The graphics are borrowed from previous titles, so it ends up a dated game visually.

As for what its symbols will give us, there are the Royals in the low paying positions, along with images of cash, cheques, gold bars, coins, a purple gemstone, and a Vault Door.

While Gameburger Studios is the company that created this slot machine, Microgaming has the rights to this name and will feature the game exclusively on its platform. It’s a type of partnership that they’ve made popular, and there are a lot of small studios that have been signed on to create new slots for their collection. 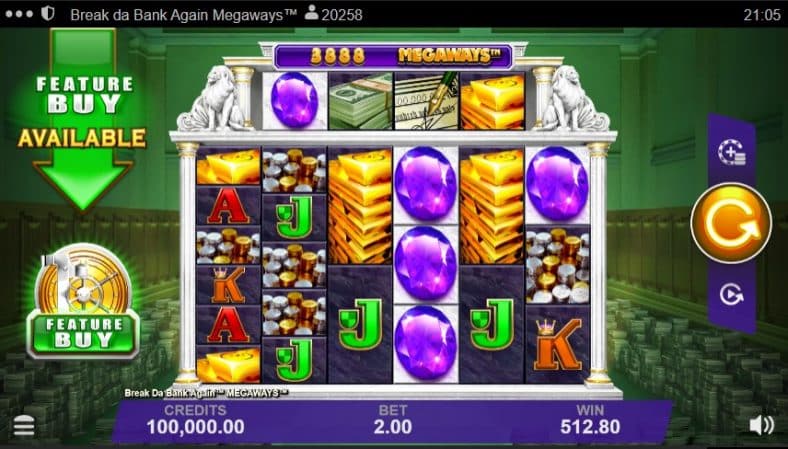 With a betting range between $0.20 and $20, Break Da Bank Again Megaways is accessible to a lot of players. You don’t get any guarantees though, regardless of the bet size, as the number of ways to win will still be random.

Break Da Bank Again Megaways can have up to 117,649 ways to win, or Megaways, and it uses a 6-reel setup for this, with an extra 4-symbol horizontal reel at the top of the middle columns. Up to 7 symbols are possible for each reel, though they could be as few as 2. Since it’s completely random, the ways to win number can change significantly each spin.

First of all, let’s talk about the Rolling Reels. This mechanic has other names in some slots, so you might know it as Cascading Reels, Avalanches, Drops, etc. They mostly work the same way though, removing winning symbols and allowing others to replace them. This can lead to more wins, and during free spins each trigger will also boost the multiplier.

Wild symbols do exist, but they’re only present on the horizontal reel, at the top. Their advantage is that they also boost wins by 5x whenever they substitute for another symbol. They can land on all reels during free spins.

Gaining access to free spins is done through 3 or 4 scatters, which have to land at the same time. The reward will consist of 10-15 free spins. As I mentioned above, an increasing multiplier is added to the Rolling Reels mechanic. It goes up by 1x after each Roll.

There will also be a random chance to get a Hot Mode version of the free spins, but only if you got 4 scatters as the trigger for the feature. In this mode, the starting multiplier is 20x, rather than 1x.

24,185x the stake is a healthy jackpot for any modern slot machine, and it’s one of the better rewards available in Microgaming slots. There is a downside though, and that’s the high volatility, even though it also has a healthy RTP of 96.15%. Microgaming has started offering several RTP values that operators can choose from, which means that you might also get the game with returns of 94.14% or 92.12%.

Break Da Bank Again Megaways is a game that is bound to get some attention thanks to the series it was launched in, but if you compare it with most slot machines using this engine, you’re going to find several that do even better in most respects, from graphics to features.