Very colorful, and modern-looking at the same time, Candyways Bonanza Megaways does have the candy themed symbols which its title promises. In that, it doesn’t look all that different from one of the many other slots which have the same focus on sweets. What’s different though, is its 3-reel setup, especially since it’s combined with a Megaways system.

The symbols you’re going to find inside are a lot less interesting than the mechanics involved. What you’re seeing, is a series of candy style symbols, some of them showing hearts or stars, with bright colors and various geometric shapes.

Stakelogic and Hurricane Games are the parents of this one, though the actual developer which worked on the slot appears to be the latter. If you find yourself at a Stakelogic casino, you will discover a long list of excellent slots that you may choose from, and as far as online developers go, this one is a good pick. 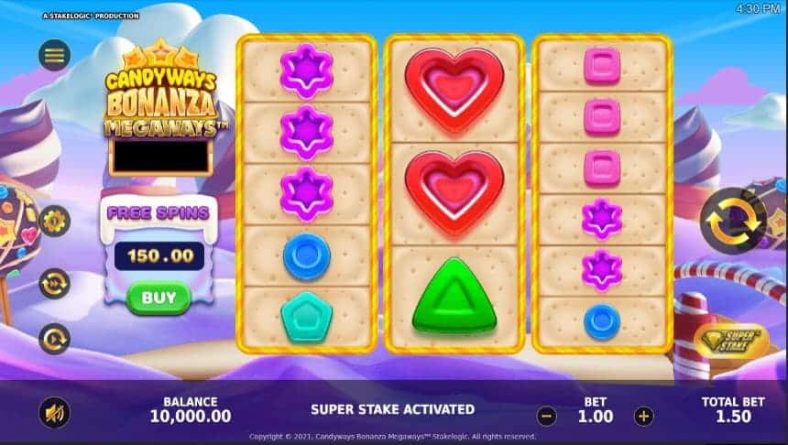 As the slot has big rewards, the wagers will not go terribly high. $10 is going to be the maximum bet possible, while $0.10 will be the minimum allowed.

Super Stake is also an option, which gives the bet a boost by 50%, but it will then double the odds of triggering the main feature.

What you get in exchange, is a game area with 3 reels, which has a random number of symbols on each one (2 to 8 per reel). The number of ways to win (Megaways) is going to be anywhere between 8 and 512. To get a combo formed, you need matching symbols on all three reels.

Other than the Megaways system, which is already quite unusual for a 3-reel game, the only major feature offered will bring you free spins, and it will do it via scatters.

Showing some sort of chocolate ball with candy on it, the scatter may land once on each reel. You will need all three reels with this symbol on them, in a single spin, to gain access to 10 free spins.

It’s quite the powerful feature, and it’s something that you can pay to access, should you want to. It will cost you 100x the stake, to get inside.

Even though you get only 3 reels, and at most you have only 512 Megaways active, the potential in Candyways Bonanza Megaways is still excellent. 20,000x the stake is the most that can be paid in one spin, and that could mean $200,000 cash.

With its medium-high volatility, this slot promises to be a risky affair for most. RTP wise it’s looking acceptable, with its 96.01%.

Candyways Bonanza Megaways is one of the more exciting new Megaways slots that we’ve seen lately. It retains the great potential of the other slots in this category, but it also uses only 3 reels, and instead relies on huge multipliers to get you its top prizes.