Coywolf Cash will feature a wildlife theme, designed in a Native American style. The two will often go hand in hand, when developers are covering wild creatures from North America, as is the case here.

The mixed breed coywolf (coyote and wold) is the star, but the reels will also have symbols with wolves, bears, deer, lynx, eagle and fox. Lastly, wooden Royals appear in lower value icons. Besides the main symbols with the coywolf and wolf, as wilds, there are Totem scatters as well.

Play n GO doesn’t disappoint when it comes to the graphics used in their games, and I like what they did with Coywolf Cash as well. 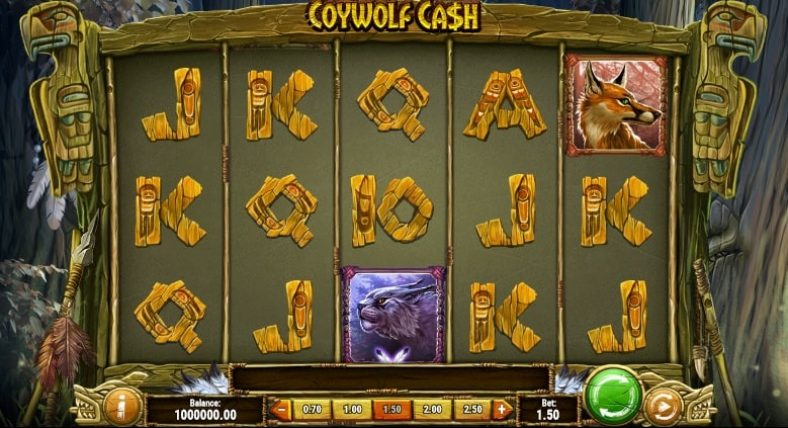 Play n GO, a developer with Swedish origins, is one of the giants that dominate the online casino niche, offering some of the most exciting and volatile slots that this category has to offer. Finding a slot with a big prize and plenty of risk is easier than locating one for casual players, and a lot of players love them for that.

Look at the bottom row of options, and you will discover there a list of bet values that you can use. The smallest one is worth just $0.10, while the highest will be at $100.

The game will have 50 lines total, even though only 5×3 reels are used, so they’re a bit more crowded than in most slots. That’s a good thing, as it makes creating those wins easier, with the usual 3+ symbols landing left to right on the same line.

You will encounter two types of wild symbols in Coywolf Cash. One takes the form of the stacked Coywolf, the other has the Alpha Wild. The former will appear on the reels 2 or 4. Both are used as replacement symbols, but they also take on additional roles.

The Wild Reel is something that you get during rounds where a Mask Scatter shows up on reel 3. The first stage will add an extra reel at the top, which will spin horizontally, with either blanks or Alpha Wilds on it. If there are Alpha Wilds, they spread to the reels found underneath, and turn them fully wild. Those that have blanks above will remain the same. You can get three wild reels at most, during regular spins.

8 to 15 Prey Free Games are activated via the Totem scatters, with up to five symbols needed there. There are two spins that the Wild Reel has in this mode, if triggered. Get another Mask at that point, and the free spins can give you Coywolf wilds with up to 7x multipliers, along with the usual Alpha Wilds (up to 4).

With so many wilds, and with multipliers added at times, the potential is huge in the free spins, though it’s not guaranteed.

Play n GO is well known for offering high volatility slots, so that part is not a surprise here. However, given the 10 out of 10 rating that the game is getting in terms of risk, a 4,000x jackpot seems low, especially for a developer like this.

Coywolf Cash is the type of high volatility slot that Play n GO is known for, but the payouts are not as high as in some of their other slots.