ELK Studios, a developer that’s designed a relatively small number of games so far, is usually taking its time with each one. It shows in the quality of the design, and they can make even a 3-reel classic slot look good, just by adding the right elements to the reels and to the background image.

It’s not going to look like a regular slot, thanks to its use of 3×3 reels at the bottom, with a second set at the top, but the symbols are all borrowed from older games. Wild logos, Diamonds, Lucky 7s, Horseshoes, Bells, Bar logos, Limes, Watermelons and Chilli Peppers, are all present as symbols. 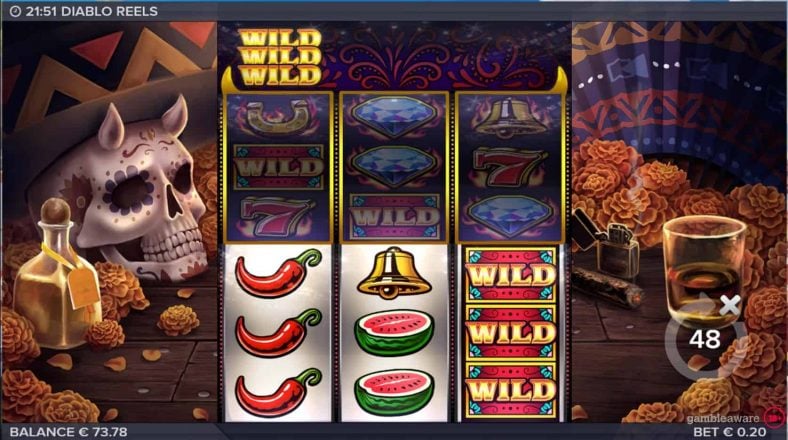 In the last 8 years or so, since it’s been established, ELK Studios has only offered us 44 slot machines, and yet the quality has almost always been excellent. These days, they seem to have about one new game each month, and Diablo Reels is the latest one they’ve released. Some of their popular past titles include games like the ones from the Gold series, or Wild Toro (2017 Slot of the Year).

The betting system is standard in ELK slots, so once again we’re using 100 coins while selecting a bet of $0.20 to $100, to cover the next spin.

The game area is getting 5 lines on its 3×3 reels, but there is a secondary game area to unlock, at the top of the main one. It’s only going to happen at certain moments though, and at that point you’re playing with 10 active lines.

One of the symbols that can help out, the wild will show up in two versions. One is the regular wild, which you use as part of various winning combinations, provided that the rest of the symbols needed are there as well, on the same line.

The second one is the Nudging Wild. This one shows up and pushes the reel it lands on towards the upper side. Once it leaves the area through the top, it activates the upper set of reels, to use for a single respin. The version of this wild which lands on the upper reel set, can come with a multiplier. If several multipliers are present, then their values are added together.

If activated, the upper set of reels will have only mid and high value symbols, while the bottom section can also get bonus symbols and low value icons.

Wild Stack Respin is a feature that requires a stacked wild which will cover a full reel. It will expand to the other set of reels as well, in the same column. Next, a free respin follows, with the wild reels sticky on both sets.

As for the free spins, 10 rounds can trigger by getting three scatters anywhere on the bottom set of reels. It’s a feature that plays with both sets of reels active, and it can be retriggered.

Diablo Reels looks like it’s going to be a lot more interesting than most of the slot machines we typically see featuring 3 reels. Using plenty of features that feel unique, but also keeping things much more volatile, it’s not the type of game that I would recommend to a casual player.