With clear inspiration from the 70s, and full of psychedelic style fruit symbols, Dream Diver will not be the type of game to put you to sleep though. You see the sleeping man and his cat on the left side, on the bed, while on the walls of his room you will find hippie signs with Love Peace messages, along with other objects that are in a similar style.

The reels get a selection of classic symbols, fruits mostly, but you will discover that they come with a retro design style that is borrowed from the 70s. They definitely don’t look like regular classic fruit symbols, which is a plus for them. Diamonds, the Lucky Seven, a Golden Bell, Apples, Plums, Oranges, and Cherries, will be the regulars. The feature symbols come with the Pick Me and Wild logos.

The company behind Dream Diver is called ELK Studios. They’re responsible for a series of excellent slot machines, on a variety of topics. They have medieval-themed slots like Poltava, movie titles like Bloopers, and even sports related content with Champion’s Goal. You get a little bit of everything in their collection, and usually it’s going to be a very well designed slot machine, with good features. 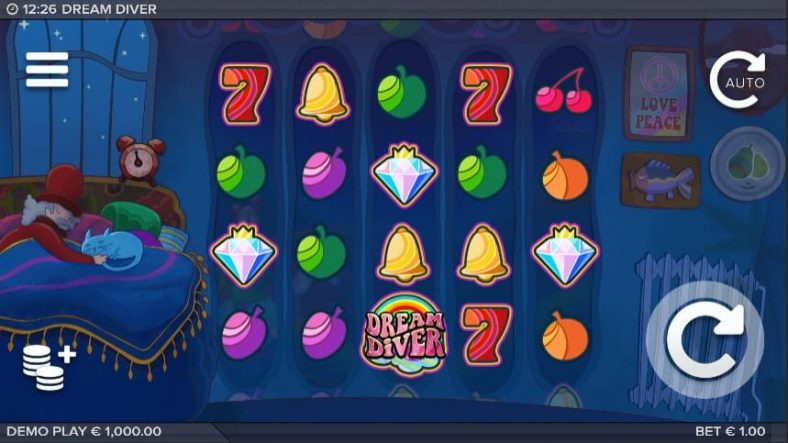 All slots that I’ve seen ELK Studios put out, have a similar betting system. They always use 100 coins, and the total bet is the only one you get to select from. Its range is $0.20 to $100 per spin.

The reels give you a connected ways system, with 5×4 reels featuring 158 possible combinations. The symbols need to touch, horizontally or diagonally, as they form their combo left to right, on adjacent reels (3+ symbols needed).

Wilds are among the symbols that you get on the reels, and it appears to take two forms. One is the regular wild, with the Cat, used as a standard substitute, increasing the odds of a combination forming that round.

The second wild is stacked, and it also gets a nudge into position, so in effect it’s the same as an expanding wild (you still get a full wild reel out if it). It’s only available on the middle reels (2-4), and it is the start of a respin feature. The wild reel gets locked, the others respin, and if additional stacked wilds land, the feature will continue until that’s no longer the case.

You’re also looking for Pick Me scatters landing three times on the reels, to trigger their bonus game. A total of 6 levels are provided inside, and as you make your picks you can claim instant prizes, get bigger multipliers for the next wins, get more lives, and go to the next levels. There are also picks that will end the feature early. As you get through the levels, you eventually get to the Dream Wheel (6th level).

The Dream Wheel spins to reveal a multiplier, to be used on the feature’s wins.

The ultimate reward in Dream Diver is the 2,500x jackpot that’s possible. It’s not going to be life-changing for everyone, but it’s still a decent top prize, and it fits with the medium volatility rating that the game has. On the other hand, the odds for the average player are a bit worse than expected, since ELK Studios decided to drop the RTP for their new slots to 95% (previous titles were at 96%).

Dream Diver looks like a fun one to try out, and in the short run it might be worth a look. However, the reduced RTP of 95% makes us recommend you don’t put too much money into this one.