It doesn’t take much of an idea to inspire a slot machine’s design, as you can see in Flip Royale as well. It’s a simple coin themed game, which gets a feature and some design inspiration from the coin flip. There is the inside of an elegant room behind the reels, of which you see only a couple of armchairs and tables, while the simple blue reels are populated with equally basic symbols.

Those symbols have five icons showing Royals, beginning with the 10 and ending up at the A. We then see four types of coins as medium symbols, including the top-paying one made out of gold.

Well-established by now, Quickspin is a developer that has always managed to create gorgeous graphics in their slots. To give you a few examples, there are slots like Sakura Fortune, Big Bad Wolf, or Spinions, which you should check out. 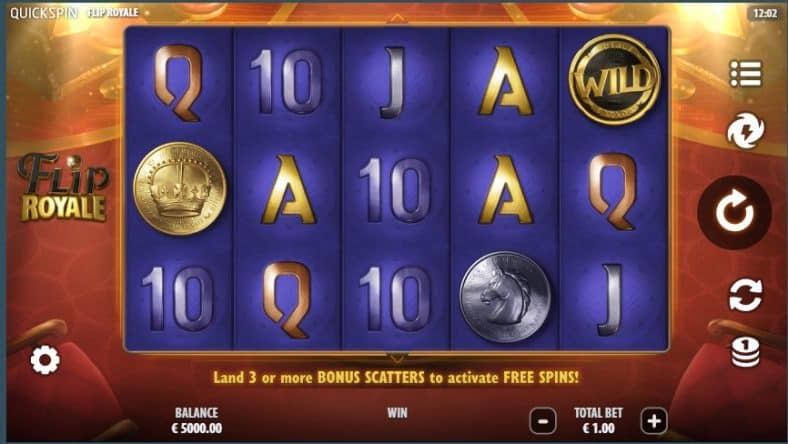 The setup is relatively simple, and you can spin 5×3 reels, which will have a total of 10 active lines. A minimum of 3 matching symbols are needed for a new combo, and the number could go up to 5 symbols. They need to be arranged from left to right.

An important feature that’s included in Flip Royale, the Wild is shown with its own logo made out of gold. Easy to use, and profitable in the long run, it’s usually useful because it is a substitute symbol. Next to regular symbols, it acts as them, so they can create their combinations. However, you are not able to use wilds as replacements for the bonus scatters. Winning combinations created only with wilds will bring you rewards of 2x to 10x the stake on each line.

The Coin Flip is one of the major features that they’ve implemented. You just need a Coin symbol to occupy all positions on a reel. This triggers the Coin Flip, and for each Coin symbol that’s on that reel, a new Coin will be added somewhere else in the game area. It could be Wilds instead of new Coins, if there are several Coins acting as triggers at the same time. Fill up a new reel with these Coins or Wilds, and then the Coin Flip will trigger again that spin.

Finally, you could get free spins as well from Flip Royale. It’s either 6, 10, or 20 rounds, which are offered if there are 3, 4, or 5 bonus scatters on the reels. You’re getting Coin Flips every single round here, so it’s guaranteed to trigger.

Flip Royale is not a very risky slot machine to play, and so it’s naturally going to have smaller rewards to give. However, it pays even less than you’d expect. While the typical medium volatility slot will often pay 2,000x or more, Flip Royale offers at most 433x the round’s stake.

Out of the three RTP values that are included, the one worth using is at 96.19%.

Flip Royale is not a very elaborate game, doesn’t pay all that much, and overall I found it a tad boring. It tries to do something new, but just because it’s a new mechanic, it doesn’t mean it’s going to be fun.