Illogicool is the latest science fiction themed slot machine, and it’s coming via ELK Studios. There is no particular TV series or universe that is associated with this game, just a generic space-themed human civilization for the most part. There is one critter, the Trouble, which looks quite similar to the Star Trek Tribbles, but other than that there is no connection between the two worlds.

With modern graphics, and an image of the ship’s floating bridge chairs in the background, the slot has a large setup with 6×6 reels in the middle. Four Royals are the symbols with smaller rewards, and they use the letters J, Q, K, and A. The five premium symbols have images of computers, ray guns, spaceships, and two humans, one male and the other female. The Trouble is a fuzzy critter, and one of the major feature triggers.

Illogicool is one of the slot machines that are available via ELK Studios. It’s a developer with plenty of good games under its belt, and it tends to keep the quality at a high level. I would recommend many of its 60+ slot machines, but to mention just a couple, I’d recommend you try out Wild Toro and Ecuador Gold, both decent options that are part of larger series. 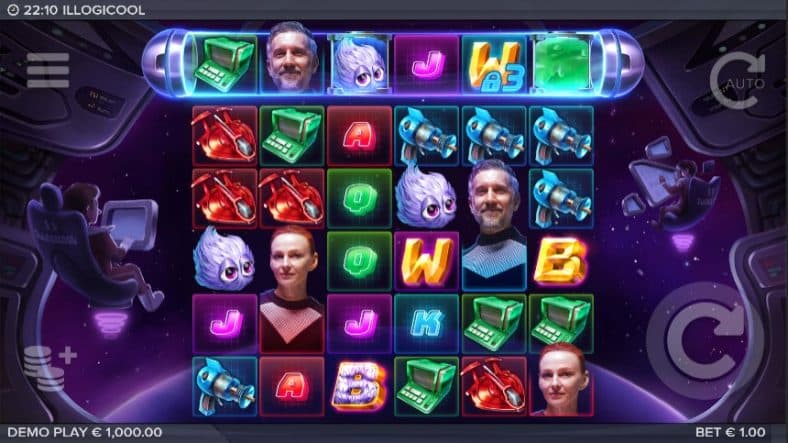 The wagers selected in Illogicool are going to have 100 coins in them, but you are only picking the total value going into each spin. The range there is between $0.20 and $100.

Illogicool delivers a large number of ways to win, 46,656 lines being included on its 6×6 reels (including here the 6th row, called the Cool Reel). Every single potential combo is accounted for, so as long as you get those winning symbols on 3+ consecutive reels from left to right, you will get paid.

First, I should mention the Cool Reel, a special row of symbols found at the top of the game area. It will include both feature and regular symbols. The former only become active when they are dropped in the main game area.

Whenever you’re forming winning combinations, there are explosions which will occur and remove the symbols involved in them. This allows symbols from the top to come down through a gravity-assisted system. The empty positions are then occupied by other symbols.

Several of those feature symbols are going to be wilds, which have the following effects when dropping to the main game area:

The B logo serves as the scatter, and the symbol which you can use to win 10 to 25 free drops (free spins, if you prefer), as well as up to 30x multipliers. You can get higher multipliers via special symbols landing inside, along with additional free drops.

The Troubles are cute little critters, which need to appear in groups/clusters, in order to be of use to you. Having 2+ Troubles connected, results in them becoming small overlay icons in the corner of those positions. You get new symbols then, in those spots. As you form more wins next, those Troubles expand to other positions, multiplying. Once you get a non-winning round, the Troubles will all turn into a single type of symbol, either wild or regular, giving you a chance at a big win.

With up to 10,000x the stake, the top jackpot of Illogicool looks like it’s got the potential to convince a lot of players. Naturally, the volatility is high, but what disappoints most is the 95% RTP.

Leaving the low RTP aside, the rest of the slot machine is one that’s worth looking into. There are a lot of cool new features implemented inside, ranging from Troubles to several wilds and the free spins with big multipliers.