Bigger rewards aren’t the only ones that are improved in Jammin Jars 2. The sequel has been upgraded somewhat, with slightly better symbols showing up on its reels, and with a tropical disco theme for the background image. It remains a fruit-themed slot machine, with a lot of delicious icons on its reels. Cartoon-style fruits can still look good, even though they’re very common in older slots.

As for what the symbols will actually show us, there are a total of 6 fruit symbols that you get inside, as the regulars. Feature symbols will provide us with the image of Jam Jars, along with instant prize symbols.

It’s going to be a big game area, with 7×7 symbols present in it.

It might not be a big developer, but Push Gaming is highly regarded by experienced players. They take their sweet time working on new games, but then they come up with something very interesting and highly volatile. Jammin Jars 2 is a perfect example of that, actually. 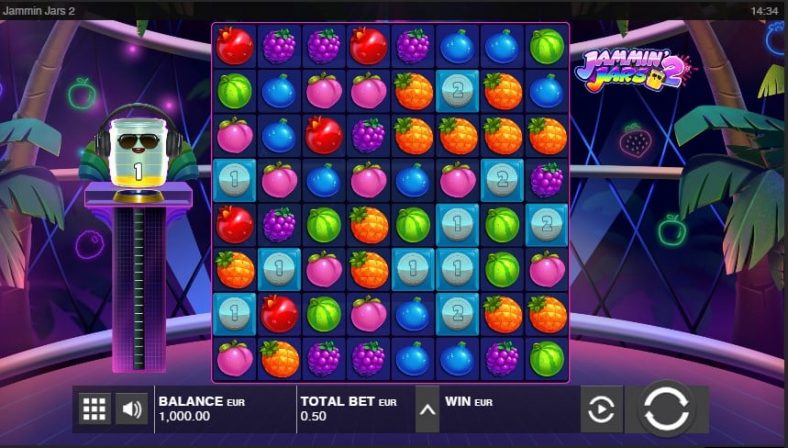 The dozen or so bet values that you can choose from, will be worth between $0.10 and $100. You pick the one you’d like to use, and that’s pretty much it, you can start playing the game.

What you get in exchange, on its 7×7 reels, is a Cluster Pays system. Forming a cluster requires 5+ matching symbols appearing together (they need to touch horizontally and/or vertically). For better wins, you need more symbols in the cluster, and each symbol pays the best when at least 32 are together.

Forming a cluster is only the first step. A collapse of the winning cluster follows. This clears some room on the board, and there are new symbols that will land there, and hopefully this can bring new clusters as well.

A major feature of Jammin Jars 2, will be the Wild Jar. It’s a substitute symbol, that’s going to contribute to any cluster being formed next to its position. It needs to be next to it, in order to contribute to its formation. The wild will move to another position then, but it doesn’t go away when the Collapse triggers.

Another advantage of the Wild Jar, is that it has an increasing multiplier, which gets a 1x boost after each winning cluster that it is a part of.

Get enough of these Wild Jars on the reels, and you trigger the free spins (they’re also used as scatters). You need 3 or more Wild Jars, to win 6 free spins.

The game also has Instant Prize symbols, which can form their own clusters, and will pay based on the values shown on them.

Following certain Collapses of the winning symbols, you may get a Fruit Blast to trigger (it’s random). Giant Fruit symbols are added to the game area, giving you multiple positions of the same type, and making it easier to get clusters formed.

Finally, the game also has a Giga Jar feature, towards which you’re working by collecting Gold Vinyl icons in the base game. It’s a random event, which can trigger when you fill its meter. It gives you up to 4×4 Instant Prize symbols, along with up to 4 Wild Jar symbols. You get 8 spins in this mode, and the chance to win more.

Jammin Jars 2 has a very long list of features, so it seems like there is always something different going on. I don’t like the lower RTP, the original was actually impressive there.