ELK Studios continues launching new slots for the successful Gold series, and for this particular title they’ve gone to Nepal. Katmandu Gold gives us the expected Asian-style graphics on its reels, and there is more than a little gold involved in that design.

Looking at the symbols which are part of it, some will give you Wild or Bonus logos, while others will show the main character, a dragon, a tiger or a turtle, though in each case they’re made of gold and have precious stones for eyes. Moving on, we find four symbols which look like they’re based on the elements, and then four others which are just low paying Royals.

Katmandu Gold was designed by ELK Studios, a company which has over 50 slot machines in their collection right now, even though they’ve been established in 2012. It’s been a while, and yet they don’t appear to be in a hurry when designing slot machines. It’s something that works in their favor, since the design and gameplay is almost always great in their games. 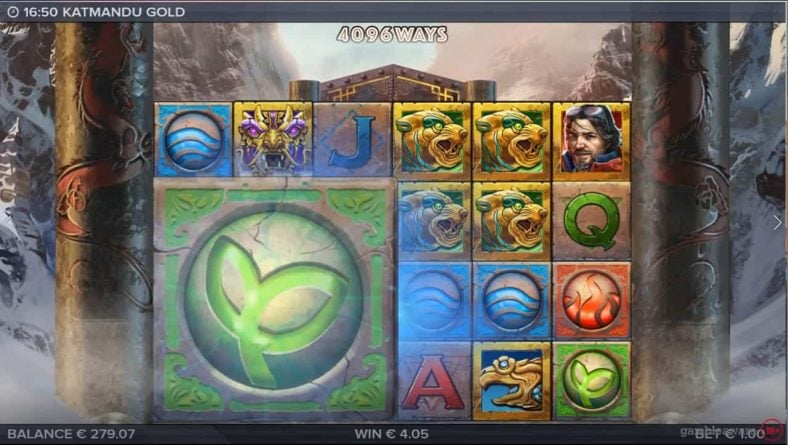 ELK Studios has a certain way of designing the wager system in their slots, and it doesn’t change much. You almost always get a dozen bet values that you choose from, with 100 coins used and with a range between $0.20 and $100 per spin.

You get in exchange a system with 4096 ways to win on 6×4 reels, but which can expand to 6×8 reels, or to 6×9 reels in certain special circumstances. Reel expansion aside, the way to get paid is simple, as you just need the 3+ matching symbols landing left to right, on consecutive reels.

First, let’s see how the reel expansion works. This is part of the cascading reels mechanic, which triggers when you are forming winning combinations. These wins are getting removed, and new symbols are coming to replace them. The game will also add one extra row of symbols, for each such cascade, and with four consecutive cascades you can get to 6×8 reels active (262,144 ways). The game area will reset once that spin is over though.

During cascades, there is also a chance that a big symbol will appear. Its size can be 2×2, 3×3 or 4×4, and all positions will be with the same symbol in them.

The Ice Climber feature triggers when you get two special Yin Yang symbols in view. Both the triggering symbols and the ones above are turned into other types of symbols. Should this happen on the 8th row, a 9th row of symbols will appear, where there would be 531,441 ways.

Expanding Wins are also used, and they rely on arrows which appear as part of regular symbols. Provided that the symbol in question is included in a new combo, the arrow will decide the direction of the symbol’s cloning process. It will transform positions in that direction, into the original type of symbol, which adds to your wins typically.

Finally, up to 25 free spins are available, when bonus symbols appear scattered 3 to 6 times. An increasing multiplier is activated for each bonus symbol that shows up after that.

Katmandu Gold looks as impressive as the rest of the series, if not more so. It has big prizes to give, pretty enough graphics for you to check out, and a unique mix of special features.