ELK Studios recently released Micro Knights, a 7-reel, 7-row video slot that benefits from cluster pays, where you need to form a cluster of 5 or more symbols connected vertically or horizontally to win payouts. Thanks to the Avalanche feature, winning icons are removed with new ones. The three Knights will help you win up to $250,000 in a single spin.

The Charging Knight will clear rows and get the icons in the Queue, the Smashing Knight will increase the number in the Queue, while the third Knight will keep track of the wins in a single reaction, because, once the meter is full, you will activate one of six Feature Flags on the offer. The Goblet is the Wild, while the Crown is the Scatter that triggers the Free Drops Bonus, with the meter and the Queue being sticky during the feature. 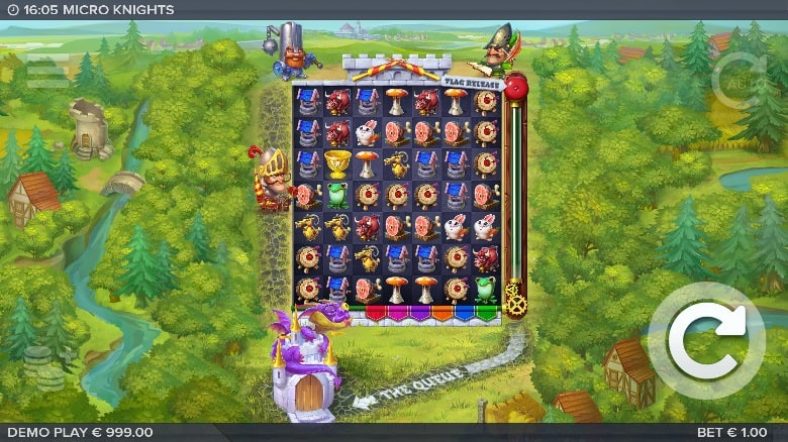 Looking back at 2013 and their first video slot The Lab, ELK Studios have crossed a very difficult but also a successful path. Their current portfolio offers around 40 titles, but even so they have managed to find their place under the sun, despite the fact that they are still not as strong as other industry giants.

The Swedes made sure that their games offer action and excitement, while boasting outstanding visuals and soundtrack. Due to the fact that they go mobile first, ELK Studios titles are very popular among mobile gamers.

The reels of the 2020 release are set in a kingdom far far away, and the entire kingdom is guarded by three Knights, which will not appear on the reels as symbols, but will be there to help you keep everything in order and to conduct a couple of random additional features.

Also, there is the Dragon, which stands beneath the reels, guarding the castle and the Queue, where random icons will be sent by the Charging Knight. There will be Cows, Goats, Rabbits and Toads on the reels, As well as Mushrooms, Archery Targets, Wells and Chunks of Meat. the Golden Goblet is the Wild that substitutes for all regular symbols, while the Crown is the Scatter that triggers the Free Drops feature.

It will take you a while to fully understand the rules of the game, but everything will be clear to you after a couple of spins. The ELK Studios title features seven reels, seven rows and benefits from cluster pays, meaning that gamers need to land a cluster of at least five matching icons horizontally or vertically connected to win a payout.

Thanks to the Avalanche feature, the winning icons will be removed and replaced by new ones. Betting is fixed at 20 coins per spin, with $0,20 being the minimum and $100 the maximum wager. There are four betting strategies you can use, so pick between the Optimizer, Leveller, Booster, and Jumper.

Once a win is formed, a Charging Knight may remove symbols from a randomly chosen row and put them in the Queue, guarded by the Dragon. These icons can only be used to contribute to upcoming wins in the same Avalanche, and after that they are removed from the Queue. The Smashing Knight can also act in the Queue by smashing and increasing the number of icons in the queue by one.

The third Knight makes sure that every winning icon in the Avalanche contributes to the Meter on the right side of the Screen. Once the Meter is full, one of six extras will be triggered. Inferno will remove all low-value icons from the reel grid. Extra Wilds will add from 3 to 15 additional Wilds on the reels. Super Size will drop a huge icon anywhere on the reel grid.

The Charge feature will remove 2-5 rows of icons to the Queue. In the Epic Charge, all symbols from the reels will be moved to the Queue. Finally, the Boosted Queue will make all icons from the Queue to be used in forming the winning clusters.

Land three Crowns on the reels to trigger the Free Drops Bonus, which will reward you with five free drops. Here, the Queue and the Meter will not reset after each avalanche, but will be sticky until the feature is over. The feature can be retriggered, so you can get up to 10 free drops.

A total of $250,000 can be won in a single spin, but such a big win is reserved to high rollers, who are prepared to wager big as well. The max payout is set at 2,500 times the bet per single spin.

Use the help of the Knights to make as many clusters as you can. The Cow is the icon that offers the most, giving you 250 times the bet for a cluster of 20 or more of them. Micro Knights RTP is 96%.

We are quite fond of ELK Studios titles, because they boast excellent graphics and soundtracks, and that is also the case with Micro Knights, which are visually impressive. From time to time, the 2020 release can seem more like a video game than a slot.

The features incorporated are also quite good and rewarding, despite the fact that it will take you some time to understand how everything functions in this far away kingdom. Those of you who prefer going back to medieval times, fighting with Knights and Dragons, should try out Micro Knights.