Phoenix Graveyard suggests the connection to the cemetery, but there is also that rebirth connection, which you typically don’t want when it comes to such places. The Phoenix is a major part of the game’s symbols if we check out the reels, but you don’t see much of it otherwise. The look is a dark one, the buildings in the background appear to borrow from the Gothic genre, and the medieval characters from the reels suggest the same thing.

For the initial four symbols, we find Gothic-style Royals, J to A. We then see the three premium symbols that show us as many characters, including a bard, a queen, and the king.

It was developed by ELK Studios, an experienced developer that has about a decade of experience under its belt at this point. I’ve seen my fair share of slots from this company, so my endorsement of their collection is not one I give easily. 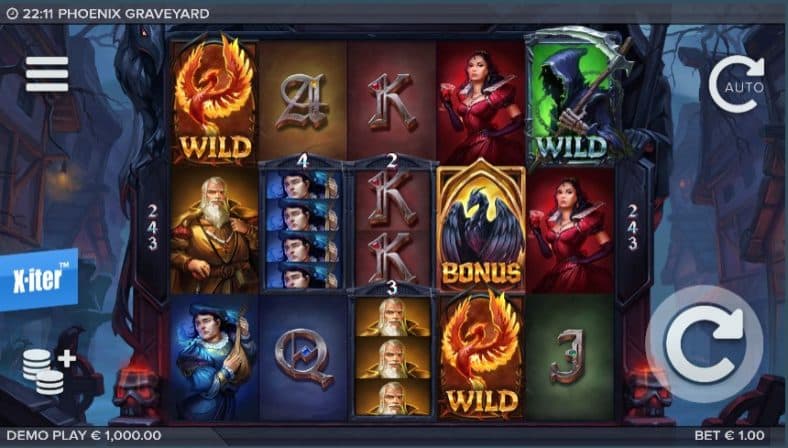 A lot of slots that I’ve seen from ELK come with the same type of betting range. The start is at a minimum of $0.20, while the maximum bet is at $100.

The standard setup is a regular one, where 5×3 reels make room for 243 ways to win. However, as certain symbols can count as up to 10 others, it’s entirely possible to play with a much larger game area, and a huge number of ways to win.

One of the important features of the game will come from the Tombstones, which may land randomly in certain positions, potentially even covering all of them. These symbol positions will then count as up to 10 matching symbols, and you can tell by the number that’s shown at the top of each one. From 15 symbols, you could go to as many as 150, and the number of ways to win that would result could be huge at that point.

A random symbol that can show up, Grim Reaper is used as a walking wild. It goes towards the left side by one position, over a number of respins, until it is removed from the reels. If a Tombstone lands in its position, it gains a multiplier of up to 10x.

Phoenix Wilds are also possible, and they will be substitutes. They too can gain multipliers if they’re affected by Tombstones.

Should the two types of wilds appear at the same time, and next to each other, you will find that a battle follows. It will result in the multiplier of the winning wild doubling in value. If the Phoenix moves to a different location, it’s possible for a Feather Wild to remain in the former position.

A major feature would also be the free spins, 6 to 10 being offered if the requirements are met, and you have 3 to 5 scatters visible. Depending on the number of scatters, there are also 1 to 3 Phoenix Wilds added, ready to be used from random locations. One upgrade is that the Tombstone positions from the triggering round will be kept locked for the free spins as well.

When it comes to potential, I’m mostly satisfied with what Phoenix Graveyard can do. 10,000x the stake is turned into a prize of up to $1,000,000, which is very good even by today’s standards. On the other hand, it’s both highly volatile and it has a low RTP of only 95%.

Overall, I feel like Phoenix Graveyard can be an enjoyable experience, especially because the features are built differently than most you get a chance to see right now. Otherwise, I’m not a fan of its RTP, and that’s an issue that I have with most new releases from ELK Studios.