It’s a very colorful and cute looking design, as expected of a game which has candy for inspiration. Some of the symbols are showing regular pieces of candy, while others rely on fruits shaped to look like sweets. It’s not a bad design, but it’s no masterpiece either. 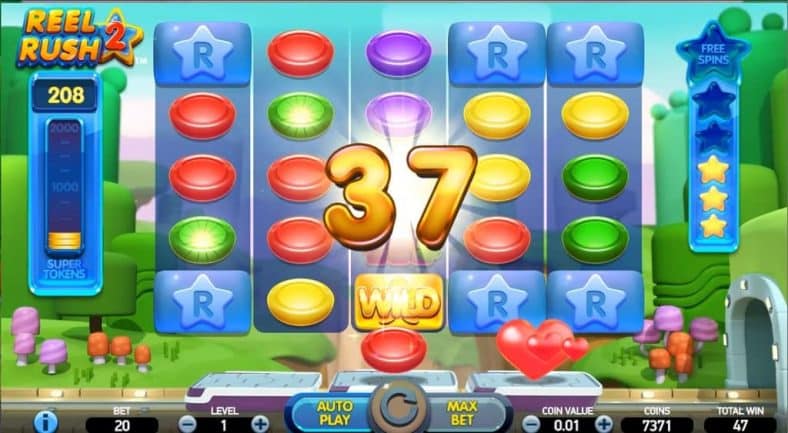 A top 3 provider of casino games, and of slot machines in particular, NetEnt has done a lot over the last couple of years, to cement their position. It’s a giant of a company, and one of the few big ones to keep up with the times. They keep launching these incredibly fun slots, and they’re typically top notch in regards to graphics or features.

The major downside I see with their work, is that it’s mostly aimed at casual players, having a lot of low volatility games in their portfolio, and they typically don’t pay all that much. Lately though, they’ve shown signs of changing in this area, and Reel Rush 2 is definitely one of the games where they improved payout wise.

The next round you’re going to trigger can have a wager placed on it anywhere between $0.20 and $100. It’s a good enough range, and it should satisfy most players, with low or high budgets.

There is a very long list of features offered in Reel Rush 2. The game relies on wilds for one, which appear on all reels, except for the first one. It’s a substitute, and it will be combined with any regular symbol, to help in the formation of a combination.

As you play, you will find that the game area gets several modifiers at random each spin, with a maximum of three possible. The modifiers are chosen at random from the eight available. These can give you random wilds, symbol multipliers, symbol upgrades, extra free spins (for that game mode), additional Super Tokens, a multiplier boost, second chances and block breakers.

Form a winning combo, and the game will give you a re-spin next. Up to 5 re-spins can trigger in a row, and each one will unlock another part of the game area, expanding the reels. At most, you can have 1875 ways to win active, during paid spins.

If you manage to get into the free spins, via their own meter, the game will start the feature. If 2000 Super Tokens are in a separate meter, then you win Super Free Spins. Otherwise, you can get regular spins, you can gamble or buy tokens. 8 rounds are activated next. Free spins play with 3125 ways to win, while Super Free Spins also have a progressive multiplier, going up with each win or multiplier booster.

You will discover a game which has a top payout of over 6,000x total stake, even though the volatility is considered medium. It’s going to do quite well among players, giving them a bit of a risky type of gameplay, but with very good potential to get paid.

I enjoyed a lot about Reel Rush 2, one of the few games with very good top payouts available from NetEnt lately, and a title where there is a lot going on each round. You don’t get bored easily with this one.