The night’s sky is going to be the star of this slot machine from ELK Studios, but that’s not all you’re seeing in the background image. There is an ancient temple, with standing stones, the kind that the Druids would’ve built in Britain, centuries ago. The reels themselves are placed between two very tall stone pillars, and using round symbols that are influenced by gravity-like mechanics.

Those symbols are far from impressive unfortunately, and four of them are just crystal/gem like, colored in red, green, blue, or purple. Four top symbols are also present, and they do look somewhat more themed, showing the Seven, Deer, Wolf, and Bird.

Coming from ELK Studios, Stars of Orion is in good company, as there are dozens of other excellent slot machines in their collection. Cygnus is another one that’s similar in theme, but you can also go for one of the Toro games, if you want a good slot machine. 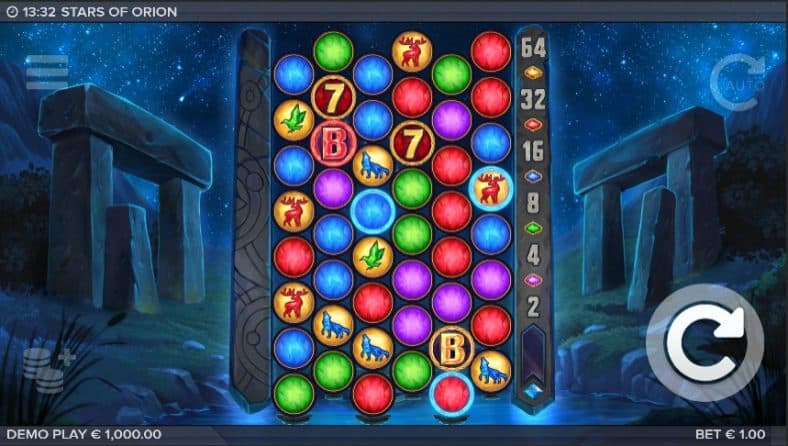 Stars of Orion uses a system with 6×8 reels, which gets you paid when you form clusters of matching symbols. At least 5 need to be in a cluster, so they touch diagonally and/or horizontally. For the best prizes possible, you need at least 15 symbols to be part of a cluster.

Forming winning clusters is just the beginning. The symbols involved will be removed from the game area, and the gravity system will bring the symbols from above down, to occupy those positions. You don’t get new symbols in the game area, so it’s not an avalanche system. Instead, you collect the winning symbols in the Magic Meter, and if you get it filled, you trigger a Magic Feature or a Multiplier. Up to 64x multipliers can be claimed in a single spin, along with random features that could either give you drops with up to 13 wilds, or symbol swapping and guaranteed wins.

Regular wilds are there as well, and they can provide you with some help, when they land next to enough symbols, and they can form a cluster with them.

Super symbols are the ones that land with blue frames around them, so they’re easy to spot. These can spread to nearby winning clusters, and it also adds the frame to all symbols from the same cluster, so first you need it to be part of a win. All symbols from that Super Cluster will be turned into the highest possible symbol, chosen from the ones found in the connected clusters.

The final feature takes the form of the free spins, which you trigger when you have 3 scatters on the reels. The slot gives you 10 free spins then. Their advantage comes from the Magic Meter, which will not reset, so it only goes up as you progress through this feature.

The Super Free Spin can trigger if you get a new set of scatters then, but with red frames around them. It’s used to bring more Super Symbols to the reels.

Stars of Orion is the kind of slot machine that can pay $1,000,000, which would be a top jackpot that’s worth 10,000x the stake. It’s pretty good, but not the highest amount you will see in a modern game, especially in those with high volatility.

Its RTP is the one that might bother some, being at 95%, while the average and expected value is somewhere around 96%.

Stars of Orion delivers more than enough mechanics and features to keep things interesting, and the top prize certainly helps as well. I’m not satisfied with the RTP that’s used though, and that could be enough to keep a lot of players away from this game.