If it’s a dragon themed game, you can be sure that a treasure will be nearby. 24K Dragon doesn’t disappoint, especially with that title, and it delivers huge piles of gold coins for the background image. If you watch it closely, you’re going to find that the back of a red dragon will sometimes come out of the piles, a cute animation that shows us just how big the treasure is. An interesting theme, to be sure, but not very well implemented, and that’s actually a surprise for a developer like Play n GO.

Starting off with a collection of metallic Royals, which have a Gothic style to them, there are five of them there, from 10 to A. Five higher value icons are also added, with images of a Lion Head, Green Crystals, Swords, Silver Dragon and Golden Dragon. A Treasure Chest will be your wild, and a Diamond acts as scatter.

From Play n GO, a major developer that launches dozens of new games each year, we typically expect great graphics, fun features and big payouts (5,000x the stake or more). Actually, 24K Dragon might not be representative for how a Play n GO slot usually looks like, it’s nowhere near their best work visually. 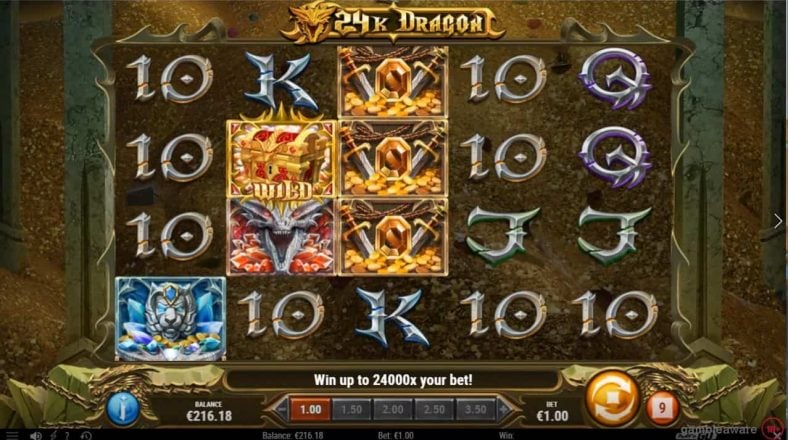 Wagers are selected from the bottom area, by clicking on a value that’s appropriate. The range of the bet can be between $0.20 and $100.

5×4 reels with 1024 ways to win are available initially, but as you awaken the dragon, the middle reels can expand by up to 4 more positions, and you can end up with 8192 ways active. Getting paid requires that 3+ matching symbols appear on consecutive columns, starting from the leftmost one.

One of the notable feature symbols, a Diamond Scatter will be available to be used wherever it may appear, but you do need a minimum of 3 in order to get their feature. 8 to 20 free spins are triggered via scatters, and retriggering the feature is possible with 2 to 5 symbols, adding 5 to 20 more rounds.

You collect the Golden Dragon Heads as they come up, and they will give the middle reels a boost, adding extra rows, until eventually they can be 8 symbols high. At that point, 8192 ways to win would be available.

Treasure Chest Wilds may appear on the middle three reels, where they are used either in regular or multiplier versions. Up to 4x multipliers can be available, and in a best case scenario you’d have three of these present, to boost wins by a total of 64x (4x4x4). As substitutes, they are only used alongside regular symbols.

An extra feature comes in the form of the 24K Respin. It requires the presence of a Golden Dragon Head on the reels, which is one of the two top paying symbols in the game.

Paying up to 5x the stake per way to win, with 8192 ways possible, and then also adding up to 64x multipliers, this is a powerful mix which has the potential to make any game pay an impressive amount. Luckily, they didn’t place a low cap on the winnings of 24K Dragon, and so it’s capable of paying 24,000x the stake per spin.

Impressive rewards tend to come with above average volatility, so it’s high risk/high reward that you’re going after here. RTP is expected to be at 96.18%.

I think that you will love most things that 24K Dragon has to offer, but if you’re the type of player which also likes something pretty to look at, you might be disappointed.