Having combined the Ankh, a highly recognizable symbol associated with Ancient Egypt, and the god of afterlife called Anubis, Play ‘n GO has created a volatile 5-reeler with a massive win potential. The Ankh which is also known as the cross of life symbolizes both the earthly existence and the afterlife, and Ankh figures are frequently found in tomb paintings and inscriptions.

Although you’re almost certainly looking to win fortunes during your mortal years, Anubis can still be a valuable ally. The deity has the power to add multiple Wilds and thus help you form paying combinations. The Ankh not only pays the top prize but also plays an important role during the bonus round. Pyramids open access to free games which can be retriggered indefinitely. 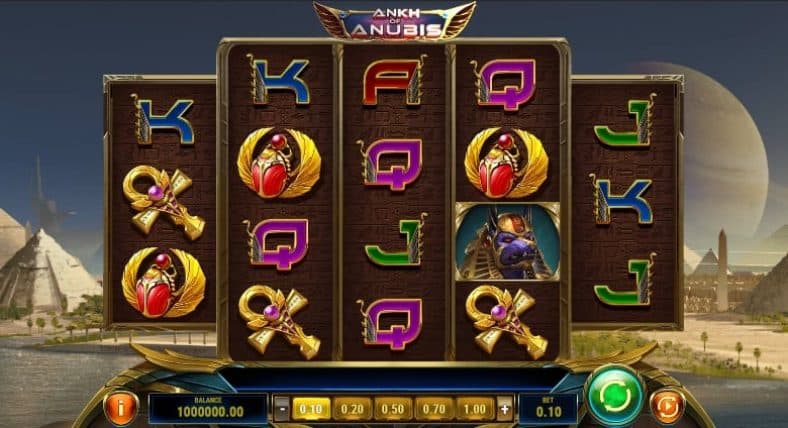 The Play ‘n GO team has been creating online slots since 1997 but the company started to operate independently under its own brand only in 2005.

The vast experience shows in the quality of graphics and sounds as well as the diversity of special features which frequently include interactive bonus rounds. To appeal to players of different tastes, the company produces both simple games with few extras and slots packed with opportunities to play for free and boost payouts.

Ankh Of Anubis plays with 5 reels and pays over 576 lines. The first and last reels hold 3 symbols each while those in between stack 4 icons per reel. Players start their journey to Ancient Egypt by deciding how much money to invest into each step towards the hidden riches. Bet per spin can be set between €0.10 and €100.

The backdrop is a bit of a surprise; rather than take us thousands of years into the past, Play ‘n GO seems to be sending us to a futuristic Ancient Egypt that may exist in some parallel universe or another planet. Fast planes continuously traversing the skies may be taking deities to wherever their powers happen to be needed the most.

The Ankh is the highest paying symbol followed by other valuable treasures and royals traditionally tasked with creating low value winning combos. In order to win, one has to line up matching icons from left to right. Spinning can be done manually or automatically. Autoplay button launches up to 100 spins and offers players to stop the reels on any win or a win which is bigger than X, when balance increases or decreases by a certain value, or when Free Spins are won.

Anubis is Wild able to substitute for any other game symbol with the usual exception of Scatter. The Power of Anubis randomly activates to add Wilds to random symbol positions while reels are still in motion. Entire reels may consequently go Wild and thus help deliver majestic payouts.

Each Ankh symbol which lands during the bonus round is collected and every batch of 5 adds Wilds to the reels. If you manage to get 3, 4 or 5 Scatters once again, your Free Spins count will increase by the same number. It’s theoretically possible to re-trigger the feature over and over again; there’s no limit. The collection meter will reset once all free games play out.

Ankh Of Anubis is a highly volatile game with an RTP of 96.2%. It may not pay often but will occasionally provide truly generous balance boosts. The maximum win is as high as 15,000x the stake.

Play ‘n GO seems eager to become an expert in Egyptian-themed games. Having already seen Rise of Dead, Legacy of Egypt and Doom of Egypt, one might fear that Ankh Of Anubis wouldn’t be all that different. It is, although the game doesn’t really offer anything hugely innovative in comparison to other recently launched titles.

Random addition of Wilds and symbol collection are by no means a novelty but that might not be an issue seeing that players like Egyptian-themed slots and have a chance to win substantial amounts.