Thanks to three different slot machines which were released at the same time, all in the Wealth series, it looks like Play n GO covered most of the traditional angles for the Asian market. In this particular case, in Beast of Wealth, we’re looking at the legendary creatures which are part of the country’s folklore.

Those would be the main symbols as well, so we’re looking at icons with a Dragon, White Tiger, Phoenix Bird and Tortoise. The 6 low-paying symbols take the form of 9 to A Royals, in the standard Asian-style font. For the feature triggers, we’re looking at the Gong Wild and the Yin Yang scatter.

From Play n GO, we’re always expecting to be pleasantly surprised at the quality of their slots, particularly in graphics. Some may be clones, you can’t offer unique content when you have a new game to release each week, but the change in theme and design helps sell them. It’s a huge collection, with hundreds of games, so you have plenty to choose from. 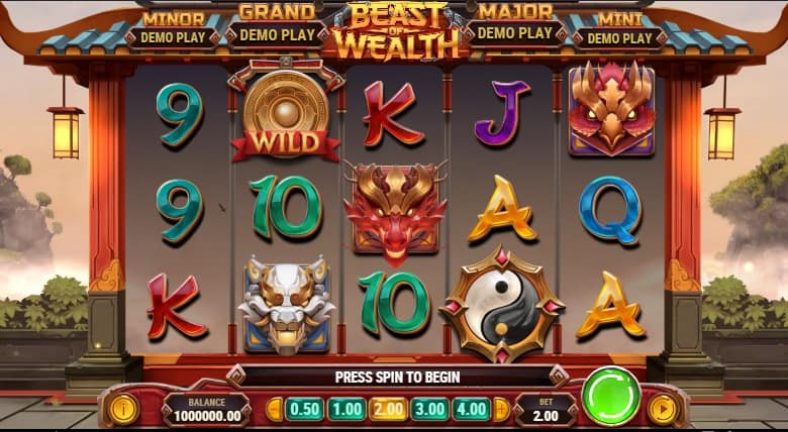 Allowing players to use a betting range between $0.10 and $100, Beast of Wealth can be played by everyone. Most budgets are going to be accommodated.

The setup involves the use of 5×3 reels, where you can form combinations through the 243 ways available. It doesn’t rely on fixed positions across certain lines then, and you’re sure to get paid, provided that you have the 3+ symbols going from left towards the right side.

The easiest feature of all, the Gong Wild is both a substitute for some symbols, and a way to get the slot’s best wins when it does it on its own (10x the stake per way to win formed). It will not replace a scatter, which is typical though.

Should 3+ scattered Yin Yang symbols land at the same time, you receive 8 free spins, but with the option to retrigger the feature. Rewards of 5x to 50x the stake are also delivered, at the same time.

As the feature starts, you select the version of the free spins that looks best to you. It will give you a single beast symbol during the free spins, and you know beforehand how many of them will be present in the game (not how many will be visible though).

Your options are to go with 88 Dragons, 98 Tigers, 108 Phoenix birds or 118 Tortoises. A fifth option allows you to go with the Mystery Pick, where the number of symbols and the special beast symbol will both be randomized.

The way to get the bonus game that can trigger progressive jackpots, is through a randomly triggered Gold Reel, on which you need a wild symbol to land. The feature involves a selection of coins by the player, until three matching ones are discovered.

Not only are you able to go after a top jackpot of 5,000x the stake, but there is a bonus game inside that can also trigger one of four progressive jackpots.

Once you combine the two, you end up with a 96.17% RTP, so pretty much as profitable for the casino as any other modern slot machine.

Beast of Wealth is going to deliver enough good features to be fun, and I like how it allows you to pick the volatility of the free spins, when you’re deciding on one of the beasts. Good graphics, above average RTP, big rewards, there is a lot to like about it.