Inspired by the film noire genre, and using a detective story that’s become a classic choice over the years, Cash Noire is a NetEnt release. It puts us in a detective’s office, where we barely see anything in the dark, and yet we can’t help but notice the woman smoking a cigarette, while sitting on a desk. The other side of the reels hosts the clue board, which is actually included in the game’s features. To be noted as well, is that the game area will have a Crime Zone, a red border surrounding three random symbols which are next to each other, and this is also part of the features that you get to use.

As symbols, your choices range from images of a couple of ladies smoking, to the story’s villain, the detective, along with lower value revolvers, daggers, whiskey, a playing card, matches and a magnifying glass. 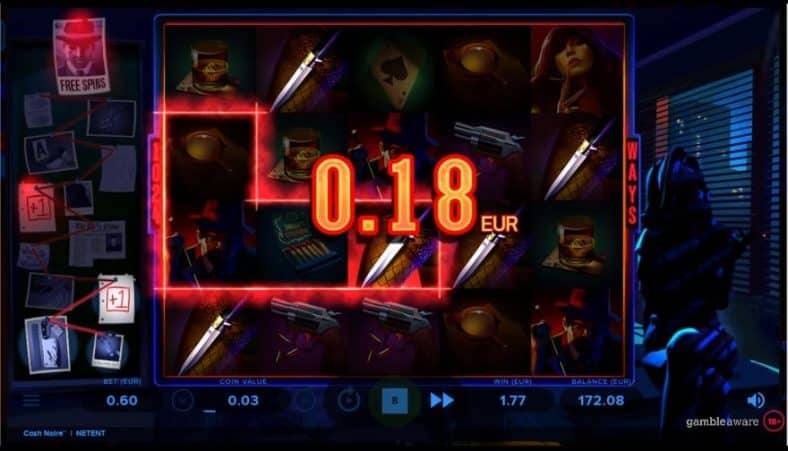 It’s NetEnt that gives us Cash Noire, and the game feels like the standard option coming from this developer. With fun and unique features, excellent graphics, and a story that’s interesting, Cash Noire appears to be relying on the same recipe that’s been used in most of the NetEnt games so far.

The game’s going to have its unique areas, the Crime Zone especially being something new for most, but the way to form its combinations is relatively standard by now. You get a game area with 5×4 reels and 1024 ways to win.

First, a word about what happens when a winning combination forms. The game incorporates the Avalanche mechanic, which takes away winning symbols, allowing new ones to come and occupy those positions. New wins and additional Avalanches can trigger as a result.

Mystery symbols can be helpful at times, the icons landing and transforming into a random symbol. It’s a random symbol when landing in most spots, but in the Crime Zone it starts a cloning process, occupying all three positions and turning into a single icon.

One of the big features of Cash Noire, the Crime Zone occupies three positions which are next to each other, surrounding them with a red border. Get winning symbols that are part of that zone, to add to the Clue List. Once you have a couple of clues on the board, the Crime Zone gets bigger, up to 4-5 positions, making it easier to get additional clues.

As for the Clue Zone, it expands to 4 spots once you get 3 to 6 clues on it, and to 5 spots when you get an additional 7.

6 free spins are going to be won if you manage to activate 13 clues on the board. In this mode, you get 5 positions in the Clue Zone at all times, and there is a growing multiplier present as well (up to 10x), which increases for every 7 locations that you get to, through the City Chase mechanic. A special map is used for this, and you get a chance to solve the mystery and reach the end, if you’re lucky.

Thanks to its low-medium volatility, the rewards of Cash Noire don’t go very high, but even 1,033x the round’s stake could prove satisfying for a casual player.

Cash Noire is a good game, with a good selection of features, offering more than enough to keep the casual player entertained.