Cat Wilde and the Doom of Dead Slot Free Play

Going by its full name, Cat Wilde and the Doom of Dead, we get a better idea of what the game is about. It’s still an Ancient Egypt themed slot machine, like other games that involve the Wilde family, but now we see Cat in the main role. Rich Wilde’s daughter is getting her own series apparently, and it is an interesting slot machine, one that includes Book style action and appropriate graphics.

Speaking of appropriate graphics, the symbols that you get to play with will include the image of Cat Wilde, along with the Sphinx, the god Anubis, scarabs, plus the usual Royals which do get a bit of an Egyptian styling to their look. Of course, the Ancient Egypt theme is absurdly common right now, so there isn’t anything unique or interesting about the look of this one, but the fact that it’s mostly a clone of the Book genre is already telling us that Play n GO didn’t go for originality inside.

Cat Wilde and the Doom of Dead 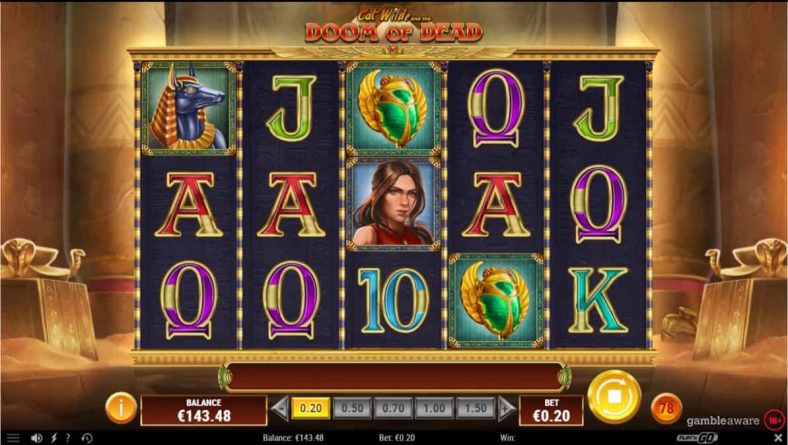 Cat Wilde and the Doom of Dead Slot Free Play

Play n GO is not always the most original developer, and this particular slot is telling of that, but at least you can count on them to have high quality games. Graphics and features are well executed, the payouts tend to be on the high side, and the RTP is also at acceptable levels. On that last count though, make sure the casino has the RTP at a good setting, above 96%, because Play n GO allows them to set it lower if they want to.

To play this game, you need to select an appropriate wager first, and the range that you work with is between $0.10 and $100.

If you’ve played Book of Ra inspired games before, you will know how this one works as well, there aren’t a lot of differences, even though some exist. It has 5×3 reels and 10 paylines, forming combinations with matching symbols, which need to appear from left to right on the same line.

While other Book style games have a single feature symbol, both wild and scatter, Doom of Dead has two separate ones.

The Wild symbol will be your substitute, and you get to use it in forming new combinations. It also has the ability to expand, at which point it transforms into an Egyptian God and covers the full reel.

Once you get into the free spins, which is possible via scatter symbols showing the image of a Compass, you receive 10 rounds. Those 10 free spins will be played with one special symbol, which is picked at random. The special symbol will have the ability to expand when it appears, and winning combinations will be formed even if the reels are not connected. It’s enough to get three symbols of that type in view and on three different reels, to get 10 winning combinations.

The payouts are often set to 5,000x the round’s stake, in these Book style clones, and Doom of Dead is no different. It’s a good payout though, and one that people expect to see. Volatility is very high, a 10 out of 10 rating being announced by Play n GO, while the Return to Player is 96.29%.

Cat Wilde and the Doom of Dead looks like a good slot machine to be playing, if you’re already a fan of this very well populated category, of Book of Ra clones. It makes its own modifications to the original recipe, but overall, it’s the same kind of experience, and if you liked the others, this one will be fun also.