With the fun retro style of the first half of the 20th century as inspiration, Charlie Chance in Hell to Pay is one of the more charming releases that you’re going to discover in Play n GO’s collection, and one of the few to also have a classic setup with 3×3 reels. The black and white graphics of the background, along with the rather muted coloring of the classic symbols you get on the reels, make for a pretty good look overall.

The inspiration comes from Charlie Chan, a TV character from back then, but that’s something that you get mostly as part of the background image. It’s taking the action to hell, and you see Charlie on the left side, while a She-Devil is visible on the right.

On the reels, the regular symbols are classic ones, so they deliver images of Bells, a 666 Logo, the double Bar, grapes, apples, lemons and cherries. Feature symbols come with the Wild Logo and the she-devil scatter.

Charlie Chance in Hell to Pay 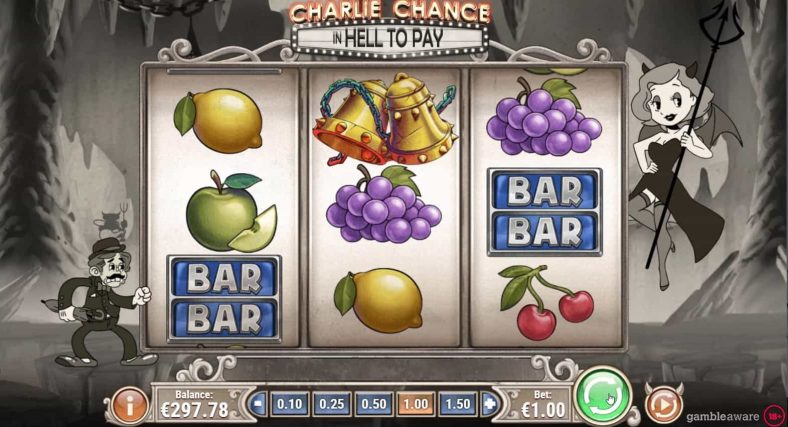 You’re looking at a game which comes from Play n GO, a Swedish company that’s been making waves for a long time now. They’re one of the top names of the industry, launching dozens of new and attractive slot machines each year. The Riche Wild series is one of their more popular, but they have plenty of others that are worthy of attention.

At the bottom, you will discover the betting range, which will go from $0.10 to $100, allowing you to use 5 active lines all along.

It’s not a very tough game to play, even though it does offer quite a bit when it comes to features, and that’s unusual for a slot with 3×3 reels & 5 paylines. All the features encountered here are typical for a modern slot though.

Several feature symbols have been added to the game, and one of those will come in the form of a regular wild, whose only role is to contribute to the formation of new wins, whenever it can act as a substitute for another symbol.

Multiplier wilds may also show up though, with either 2x or 3x boosts to wins applied when they’re part of them. Should several multiplier wilds be present anywhere on the reels, the boost of the wild that’s in the win is multiplied, and so you can end up with up to 27x total multipliers.

The She-Devil is the scatter symbol, which you get to use whenever she shows up three times, on just as many reels. At that point, you get a Feature Board, which can deliver one of several potential prizes. You might get 8 free spins, winning spins, respins with up to 25x multipliers, respins with random substitutes, or even regular cash prizes.

Payouts are very good, particularly for a slot with only 5 lines, and they can end up bringing you rewards of up to 6,666x the stake. What I like most here, is that the kind of top jackpot mentioned in its case, is typically something you get from much more volatile games. This one’s considered only Medium, which is great.

RTP is also acceptable, a 96.23% being considered average right now, present in a lot of other slots.

Charlie Chance in Hell to Pay is a lot of fun, has all the usual attraction points, including a good RTP, only Medium volatility and very high potential. I love that they include big multipliers as well, those are always exciting to get.