Honestly, we can’t remember the last time we heard of Conan. The Arnold Schwarzenegger movie popularised the brand, and led to additional movies, TV shows and cartoons of varying quality. But in recent years, the fierce barbarian has been mysteriously absent, and we finally know why! He’s been preparing for his most important debut: his very own slot!

The game has that familiar NetEnt polish we’re used to seeing from the developer. It’s not their best looking release, but it still has a few cool animations and background images. The thing that won us over were the changing backgrounds! You start off in a snowy village, but to get to see other, exotic locations as you trigger special features.

And there are a lot of bonuses to activate! There’s two types of Wilds, mystery symbols, three types of free spins and randomly activated Linked Reels. 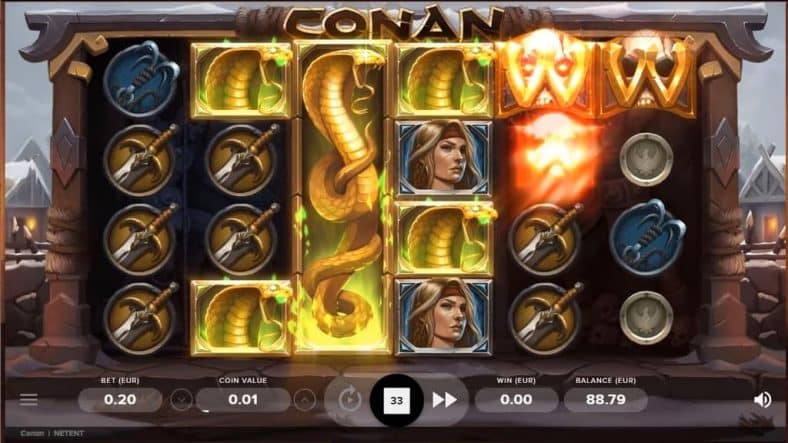 NetEnt is a Swedish company, founded in 1996, and has become outright synonymous with online gambling. Every new slot they launch immediately shoots up the ranks, drawing thousands of players to check it out.

With over a thousand talented employees across the world, the team shows no signs of slowing down! In fact, with their recent acquisition of the equally talented Red Tiger Gaming, we expect NetEnt to become even greater!

Conan is played on a 6×4 board with 24 fixed paylines, which pay both left to right and right to left. You cannot turn individual paylines on or off to adjust your total bet. Instead, you set your total bet by changing the coin value, which adjusts your total bet accordingly. Gamblers can wager between $0.20 and $200 on each spin.

This game also shows off the new user interface which first appeared in Arcane Reel Chaos. It’s still recognizably NetEnt, but it has some serious improvements! The most obvious being how simplified setting your total stake has now become.

At first glance, Autoplay seems rather barebones, as they only let you pick the number of autospins. But once you choose a number, the additional settings will unlock. Within, you can set conditions on when Autoplay should stop.

We can’t say we don’t like these graphics, but they’re not the best NetEnt has given us. Considering how much they drummed up this release, we expected better! That’s not to say it looks bad, mind you. The different backgrounds are certainly varied, but we don’t see much of them because of the reels. What animations are there look great, but it feels like there should be more of them.

Fortunately, there aren’t any playing card royals! The place of low value, filler icons has been taken by several coins with animals imprinted on them. Other symbols include a grappling hook, a sword, a helmet, and several characters from the Conan franchise.

A fully stacked mystery symbol on the third and/or fourth reel activates the mystery multiplier. The multiplier is activated in case of a no-win spin, and all wins are multiplied by the multiplier! It sits between 3x and 7x.

If you get fully stacked mystery icons, alongside Battle or Tower Wilds, the Thoth-Amon features arises. This adds between three to six additional mystery symbols in positions not already covered by mystery icons.

Finally, there are three different free spins, and you get to pick your favourite! Each extra turn comes with its own background, and is tied to one of the aforementioned bonuses. City of Thieves removes all bonuses except Tower Wilds. Temple of the Serpent does the same for mystery multipliers and Thoth-Amon, as does Walls of Taranta for Battle Wilds.

Linked Reels will sometimes spin together in a 2×4 section, landing the same symbols. During free spins, all six reels can be combined by Linked Reels.

This medium-high volatility slot has a jackpot worth 2016x your total stake. The game’s RTP is 96.28%, which is above the current industry average.

NetEnt’s release uses all of its special features to its advantage! With so many bonuses, your success is all but guaranteed… even if it takes a little bit to get there. The number of bonuses appears overwhelming at first, but it doesn’t take long to get into the groove of things. Put everything together, and you get Conan: a damn good slot.