Few slots are bold enough to welcome their players with demonic imagery and creepy chanting. But there’s no need to worry! The chanting does eventually give way to music, so you and your new pet demon can both rock out while spinning the reels. And while we can’t say the band is as recognizable as Sabaton was, they have some undeniably cool tracks. But is this release deserving of its fantastic soundtrack?

There’s no denying Demon is visually distinct, with a mass of people jumping up and down in the background. In fact, when you first launch the slot, you see the background in great detail, showing that the developers put a lot of effort into it. Of course, then you press continue, and all of those details get covered up. Instead, you get a massive, non-transparent reel, which mildly ruins the experience.

Available special features include a free spins round with multipliers. Once the extra turns are active, you can win further free spins, called Hell Spins! There are slight differences between the two, though the basic concept of not paying for spins stays the same. 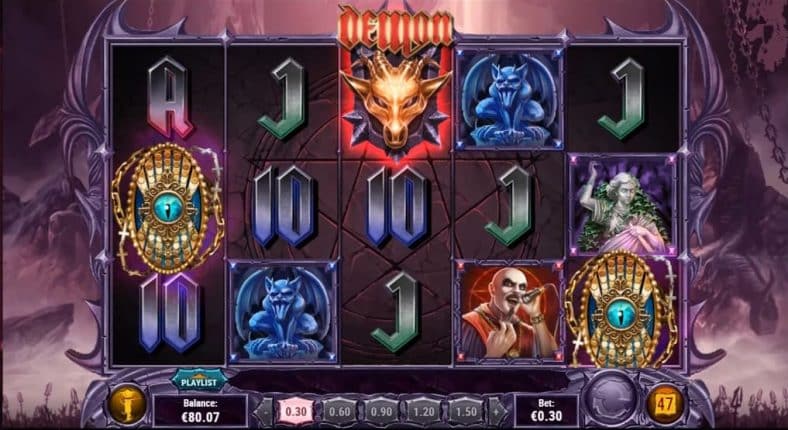 Play’n Go has a long history in online gambling, having been around since the early 1990s. They’ve mostly worked as subsidiaries for other companies, but have been operating independently since 2005. And independence has served them well! Today, the developer has offices in five countries: Sweden, Hungary, Malta, the UK and the Philippines.

With a steady stream of new games, their fans have been more than happy. And just last month, in September, the team held their Play’n Show in London! All in all, Play’n Go are doing great. Let’s hope their releases perform just as well!

Demon is played on a 5×3 board with 30 fixed paylines, which pay left to right only. Players cannot turn individual paylines on or off in order to adjust their total bet. Gamblers can set their total bet by opening a menu, and adjusting the Bet slider. This allows them to set their wagers between $0.30 and $90 on each spin.

The user interface is a little bit too barebones for our liking. At the very least, allow us to change our bets without opening a menu every time!

Access to Autoplay goes through the same menu. You can play between 10 to 1000 auto spins, which is a good spread! Play’n Go also allow you to set single win limits, as well as limits on how much your balance can increase or decrease in total. Gamblers can also set Autoplay to stop on any win, or if free spins are activated.

Visually, the game looks quite cool! We like the background, as Play’n Go went out of their way to create an otherworldly feeling. You see this mass of people jumping in front of jagged mountains, with pieces of rocks clearly unaffected by gravity. But you don’t see the vast majority of this due to reel placement.

Symbol designs alternate between playing card royals and demonic imagery. Some of the icons look quite cool, we have to admit! The man in the suit taking off his face was quite memorable, as was the gargoyle with his tongue out.

Find two Amulets on the first and fifth reel, and a Wild Mask on the third reel to trigger free spins! You get six extra turns, unless the Mask is in the centre of the pentagram. You receive 11 extra turns if you line it up perfectly! Each free spin comes with a different multiplier, going up to a 16x maximum. Hell Spins can only be won during free spins. After they’re played, free spins resume as normal.

To activate Hell Spins, you need two Wild Amulets, which wins up to eight spins. Unlike free spins, the multiplier during Hell Spins does not change on each turn. If you land a Mask in the middle of the pentagram, you can double the multiplier value for those Hell Spins.

This high volatility release has a maximum jackpot worth 2500x your total stake. Demon’s RTP is 96.50%, which is above the current industry average.

This whole slot feels like Play’n Go shooting itself in the foot. They make fantastic visuals, and then hide them behind the reels. The top prize could be bigger, but it’s artificially limited by the developers. We’d love to claim it’s great, but as it stands, it’s slightly above average.