While Big Time Gaming invented Megaways, Blueprint Gaming is probably the most enthusiastic user of this innovative mechanics. The developer has already applied it to dozens of its titles and keeps doing so with new releases. All Megaways slots change the number of paylines on each spin and so does Diamond Mine Extra Gold.

Each reel can reveal up to 7 symbols and the game can consequently pay up to 117,649 ways. But that’s not all players looking for gold will benefit from! Additional win opportunities are created by Mystery symbols, cascading reels and free games with an unlimited win multiplier. 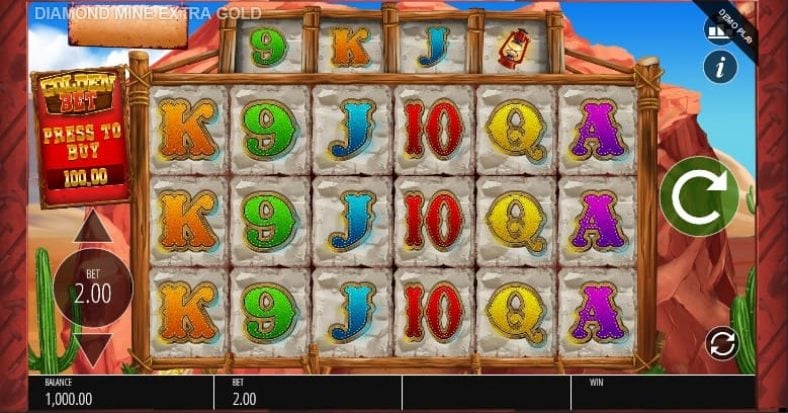 Blueprint Gaming is a UK-based slots specialist founded in 2001 and part of the renowned German Gauselmann Group since 2008. The company’s portfolio is designed to appeal to players with various preferences – those that like simple slots with few extras as well as fans of feature-packed games with unique themes.

Diamond Mine Extra Gold looks pretty much the same as its predecessor Diamond Mine Megaways. The reel area consisting of stone blocks is set against the background designed as a desert scene. The set-up is typical of a Megaways slot; in addition to 6 vertical reels, you’ll also see a horizontal one positioned above reels 2, 3, 4 and 5.

The game uses a number of symbols associated with the theme, including the miner, lamps, diamonds and tools needed to unearth them. It also features a range of Royals we’d prefer not to play with. Not because they pay very little but because they appear in just about every other title out there.  Either way, matching symbols will increase your balance if they land in adjacent positions from left to right.

Players can bet between €0.20 and €100 on each spin. Autoplay function is available to those that can’t be bothered to keep pressing the Spin button over and over again. It plays up to 100 rounds automatically and enables one to end Autoplay prematurely by setting loss and/or win limit.

Wilds show up only in the horizontal reel and perform the usual substitution act while Mystery TNT symbols explode to reveal the same random icon that can be any of those presented in the paytable except for Scatter. Every paying combo triggers a cascade which destroys winning symbols and sends a new batch to populate vacant positions. This cascading action continues as long as new wins are generated and can result in multiple payouts for a single bet.

Scatters depicted as bags full of gold act as bonus triggers. Land four and you’ll get 12 Free Spins with an unlimited win multiplier. More triggering symbols equals more free rounds: each additional Scatter adds extra 5 spins on the house. The multiplier starts at 1 and grows by 1 after each cascade. Before reels start spinning for free, the player is offered to gamble for extra spins.

Don’t feel pressured to do it, this is an offer one can accept or turn down. There are other ways to increase the free games count, namely with Free Spins Scatters which appear only in the horizontal reel and only during the bonus round. They will award additional 5 spins (3 Scatters) or 10 extra spins (4 Scatters).

Waiting for the triggering combination can be quite frustrating. Sometimes the last of the symbols needed for launching free games simply refuses to show up. That’s why Blueprint Gaming offers the Golden Bet which guarantees at least 3 Scatters and thus a sure entry into the Bonus round. If you wish to use this option, you’ll have to pay 50x the total bet.

This is a medium to high variance slot with an RTP of 96.43%. The max win potential is quite high – 10,000x the stake, though not bigger than other Megaways slots are able to pay.

We’d describe Diamond Mine Extra Gold as an upgrade rather than a sequel to Diamond Mine since the two are nearly identical; the only difference is the Free Spins Gamble.

Fans of the original game may appreciate yet another feature in a game which is already packed with extras designed to make gameplay dynamic and profitable. Others might not be as excited seeing that this new Blueprint Gaming title doesn’t offer anything that hasn’t been seen in other Megaways slots.