Based on a 2012 film, Ted Megaways is a branded title from Blueprint Gaming, and as such it relies on images borrowed from the movie, for at least some of its symbols. Ted himself is in one of those icons, along with others that include Tami-Lynn, but also a duck, a six pack of beer, along with the standard colorful Royals, in this case going from a 9 to an A.

For a game that’s branded, I’d say they did a good job turning it into a slot machine, and the graphics are good enough, at least for the symbols where they bothered to do something appropriate. I’m a lot less interested in those Royals, which unfortunately you do get quite a bit of on the reels. 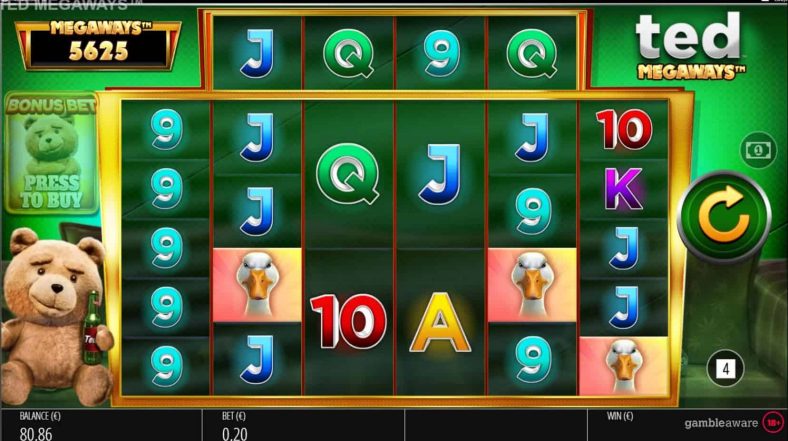 It’s a slot from Blueprint Gaming, a developer with UK origins, but which is now part of the German Gauselmann Group. They have a very good collection of slot machines, with both branded and Megaways titles being noteworthy there, definitely a company to keep in mind when you’re looking for new games to play.

It’s easy enough to get started with, as it requires an investment of only $0.10 per spin at the lowest setting. You may take it up to $10 per spin, at its highest level.

A game with megaways, such as this one, will offer you the chance to play with 6 reels where the number of symbols changes at random. Between 324 and 117,649 Megaways can be available each round. Wins will be formed via symbols landing left to right, on consecutive reels, whatever their positions on them.

When winning combinations are formed, they’re followed up by a cascade mechanic. It involves only winning symbols, removing them and adding others in their place. It’s a mechanic that has become almost a classic for Megaways slots, as many of them include it.

If you look at the top of the game area, you will notice there a horizontal reel, with 4 permanent symbols placed at the top of the middle columns. That’s the only area where you can get the wild symbol to show up, the one with the main character, Ted. From there, it acts as a replacement symbol which you can combine with any of the regular positions, to form new wins.

You can also get help from Ted along the way, as the character can show up at random to give you as many as 100 Mystery symbols to the reels. Those that you get on the reels, will be transformed into a single other type of symbol.

Thunder Buddies is a feature that will allow you to get to the free spins, once there are 4 or more scatters on the reels. You can gamble them as well here, and get more rounds. Otherwise, you’re getting 12 free spins. In free spins mode, each cascade boosts the multiplier by 1x, without ever resetting it.

With an impressive top jackpot of up to 50,000x the stake, Ted Megaways is one of the many slots in this category to pay well, but at the same time it has one of the highest upper limits out of the bunch. RTP looks fine, at 96.03%, while the volatility is at the expected High level.

Ted Megaways looks like a decent branded slot machine, especially as it incorporates certain elements which are borrowed from the movie and the main character. The fact that it can pay very well comes with certain risks, which recommend the title mostly to veterans that understand what they’re getting themselves into.