When Gods head into a battle, they show up equipped with more than swords. Those summoned by Play n’ GO to participate in Divine Showdown are able to create Wild reels, transform symbols and synchronise reels. Though each is happy to help players win, they won’t hesitate to engage in a battle against each other.

The outcome of their showdown during Free Spins bonus round can have a major impact on the resulting payout as each God uses its own unique power. Get ready for an audio-visual treat and an action-packed gameplay that’s guaranteed to keep you on the edge of your seat from start to finish. 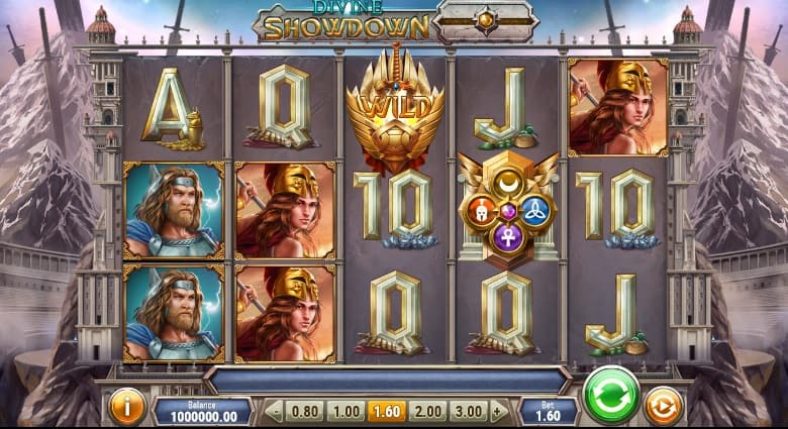 Play ‘n GO has officially been around since 2005 though the team started developing online games back in 1997. The fact they launched an independent operation later than industry leaders such as NetEnt and Microgaming inevitably impacts the size of the company’s portfolio.

Nevertheless, the quality of Play ‘n GO products has been recognized by slots fans all over the world. Each and every title looks amazing and very likely incorporates features you’ll not have seen elsewhere.

Divine Showdown is a 5-reeler with 20 fixed paylines. It offers a wide betting range starting at only €0.20 and going as high as €200. Thor, Athena, Anubis and Wukong are four high paying symbols and the Gods they represent bearers of special powers. Payouts are generated by landing a minimum of 3 identical icons in succession from left to right.

Autoplay function spins reels automatically up to 100 times. One can choose to interrupt it on any win or a single win higher than X, when the player triggers Free Spins, or when balance increases or decreases by a certain amount.

Wild Sword subs for all symbols except for Scatter. The latter is depicted as a shield with 4 symbols representing unique powers of each of the four Gods. There are two randomly triggered features to look forward to during the base game as well as the bonus round.

The Multiplier Reel may activate on any spin and boost the payout by x2 to x10. Equally randomly, a God may show up to power up your spin with a special feature. Wukong is able to make 1-2 reels completely Wild. Anubis transforms 1 or 2 randomly chosen symbols into Wild icons while Thor replaces all other Gods with its own image.

Athena synchronises 3 reels so that they consist of identical symbols and that pretty much guarantees a win when the goddess does her magic with the first three reels. If you’re particularly lucky, the Multiplier Reel will activate at the same time.

A simultaneous appearance of at least 3 Scatters triggers free games. The player is prompted to choose a God that will represent them should a Battle occur and use its own unique power to boost wins. You’ll get 3 lives and Free Spins will play until you lose them all. Before each spin, Scatter will act as a wheel which randomly selects one of the 4 powers. If the one it picks corresponds to your chosen God, reels will spin and the mighty creature use its tricks to help you win.

If Scatter picks a power belonging to another God, the Battle begins and Power symbols cascade onto the reels instead of regular icons to determine the winner. The God with the higher number of Power symbols claims victory. If you win the battle, you’ll get a spin with the respective power active and a guaranteed multiplier. If you lose, reels will spin with the opposing God’s power and you’ll lose a life.

Divine Showdown is a high variance game with a theoretical return of 96.51%. The maximum one can hope to win is 5,000x their stake.

Production-wise, Divine Showdown is a work of art. It may hypnotize you so that you fail to notice the speed at which your balance decreases. True, it’s possible to hit large wins even before the bonus round activates, but don’t forget that this is a highly volatile slot designed to pay less frequently. It may take ages to trigger lucrative Free Spins so players should make sure their budget lasts until 3 or more Scatters finally make an appearance. It’s definitely worth a try!