Ancient Egypt has left its mark on history as one of its biggest and most important civilisations. Their religion, history and culture have left their marks on the many empires that came after them. Even today, we look at their pyramids and great works, and wonder how they were achieved. Some might say it was sorcery. But as we delve into the enchanting prizes awarded by this slot, you’ll find that magic can just as equally spell your doom.

Most Egyptian themed games use a very warm colour palette. So when we saw the background bathed in cold cyan, we were caught by surprise! Then again, this release is all about the downfall of the mighty Egyptian empire! We know we should be sad, but we can’t remember death ever looking this good!

There’s just one special feature available here: a free spins round with an expanding symbol. The bonus will be familiar to any seasoned player: it’s the same one used in Book of Dead. 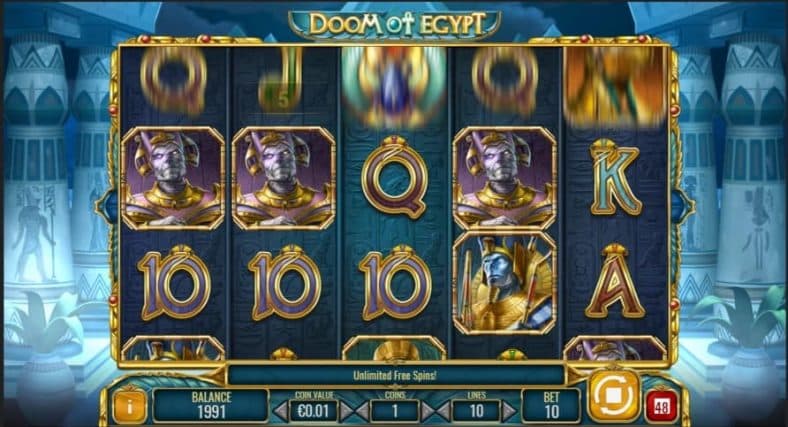 Play’n Go’s story is an inspiring tale. The studio has existed in some capacity from the 1990s onwards, but only as a subsidiary for other companies. They’ve leveraged their success to go independent in 2005, and have become one of the biggest names in the industry!

With four studios in Europe and one in the Philippines, they’ve come far from their humble Swedish roots. No matter what device you prefer or what special feature is your favourite, Play’n Go probably has a slot for you!

Doom of Egypt is played on a 5×3 board, with 10 flexible paylines which pay left to right only. Since they’re flexible, gamblers can turn them on or off at will! While this does allow you to play with a lower than usual stake, it also decreases your chances of landing a win. You can bet between $0.01 and $50 on each spin.

We like the user interface, even if it feels a bit outdated. It’s been a while since a game actually let us turn paylines on and off! You’re able to access all the important elements without entering menus, which immediately makes us like it.

Enabling Autoplay is a simple affair. Tap the Button, and you’ll get a easy to understand menu to fill out. You can choose between 10 and 100 auto spins. You can stop Autoplay with every win, or each time free spins are triggered. Finally, players can set their single win and balance limits, preventing them from increasing or decreasing without your supervision.

We definitely like what Play’n Go have done with this release. The cold cyan overlay and the weird fog are things you’d never expect to see in an Egyptian themed slot! That said, individual elements aren’t that amazing by themselves. It’s only after you put everything together, combined with the novelty of it all, that makes Doom of Egypt shine!

Symbol designs are decent, though nothing to write home about. We like the creepy Egyptian gods, especially the one whose face looks like a skull. This is contrasted with the playing card royals, whose colourful nature really doesn’t mesh well with the dark aesthetic this game is trying to achieve!

Collect three or more Wild-Scatter Scarabs to win ten free spins. Before the extra turns are played, one icon is randomly chosen to be the expanding symbol. During free spins, said icon will expand to cover the reel if it will lead to a winning combination!

The expanding symbol also has ‘Scatter Pays’ enabled, meaning it doesn’t have to be in adjacent positions to award wins. This increases your chances of winning big spectacularly!

This high volatility Play’n Go release has a maximum jackpot worth 5000x your total stake. The RTP for Doom of Egypt is 96.21%, which is above the current industry average.

Our initial impressions of the slot were incredibly positive. The graphics were instantly captivating, and we liked the different approach to ancient Egypt. The top prize is quite good, and is actually achievable thanks to the special feature! But as we already mentioned, this bonus will be immediately recognizable to gamblers!

The fact the software provider just copied a special feature from another game without any changes doesn’t sit right with us. Still, we can’t deny we had a blast playing this release.