No need to dig deep into the subject – the game’s name tells enough. Druids’ Dream is a video slot inspired by Celtic mythology, and it includes, besides the pair of druids, animals, animal traces and different lucky charms. You may notice the background is not immobile like we are used to with video slots.

The vertical movements of bubbles from below give an ambivalent impression. Whether the trees are sunk in the water, or a magical haze covers the landscape, we cannot be sure. What is sure is that this effect gives a lovely aura of mysticism which is, in the end, in line with the theme. 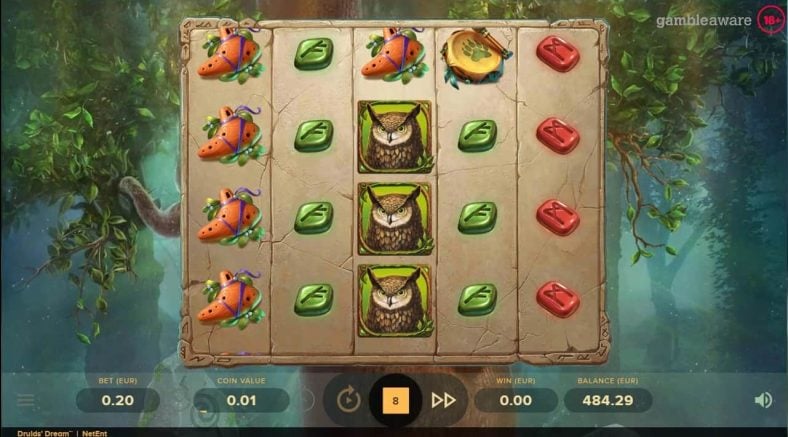 Net Entertainment (or NetEnt in short) is one of the most respectable, most represented and most influential developers of video slots in the world. Established in 1996, this Swedish giant has since produced a countless number of games covering all kinds of themes. While their competitors or wannabe competitors try to find the niche, NetEnt is playing on all the fronts.

Their games come in all shapes and sizes, so you will be able to find even traditional fruity slots in their portfolio. Offering even the Live Dealer games, NetEnt shows that for them there is no terra incognita when it comes to online gambling. Their most distinguished achievement, however, is the world of video slots. In this world, they are dominating and setting standards for all.

Played on the 5×4 grid, Druids’ Dream awards both ways left-to-right and right-to-left. To create a winning combination on any of 40 paylines, it is necessary to have at least three identical symbols.

The game can be played with coins or cash with the stakes covering an enormous range between $0.20 and $400.00. In the game settings, there are a couple of handy options. Apart from deciding between a coin or cash bets, the settings offer a useful option called Quick Spin intended for the players who enjoy fast pace.

Autoplay comes with advanced settings allowing the player to choose different rules for the automatic spins. Beside regular symbols, the game includes Wilds that substitute for any other symbol in the creation of winning combinations and Scatters that award regardless of the position they take on the reels.

Druids’ Dream offers 3 special features starting with Wild Charge & Re-spins. The feature is activated when Wilds land on reels 2 or 4 as a stack together with 1 Scatter symbol. Then Wild becomes charged, and a Re-spin is triggered. For each Wild that is charged, a re-spin is awarded. The second bonus feature is called Nudge Feature and can be activated during the Re-spins, but also during the base game.

With 40 paylines that pay both ways and numerous Wilds, it is hard to expect the high payouts per line. The highest paying symbol is Wild and White Wolf each awarding 5x a bet per line. Thus, the maximum payout for a single spin is 200x a bet.

A beautiful game that draws the players’ attention with crisp graphics and engagingg special features, Druids’ Dream is a modern video slot that will suit the tastes of different players. Since there are many slot players enjoying Celtic culture and mythology, this game will not pass unnoticed.

A series of Wilds and Scatters and their combinations activate the features and improve the game dynamics. A not so standard layout of 5 reels and 4 rows is balanced out with 40 paylines that award both ways. One can hardly expect massive payouts from a single spin, so this game should be played with patience. If a proper strategy is applied and the Fortuna is on your side, Druids’ Dream can provide you with a decent amount of cash in the end.