Following the smash success of Finn and the Swirly Spin in 2017, it was only a matter of time before NetEnt revisited the world of our favourite leprechaun. It seems like Finn’s tired of playing the flute all day. Instead, he’s made his way to the tavern, and plans to use those gold coins of his to get royally hammered! Care to join him on a booze-filled adventure?

Credit where it’s due, NetEnt has done an excellent job with the background image. It’s chock-full of detail, and kept us occupied for a few minutes as we just drank it all in. This is what it means to have the best artists in the industry. You can make a cramped table in a tavern look like an interesting background image for a slot!

There are several special features to look forward to. Fist Slam will turn a non-winning board into a guaranteed score. Random coin can transform an eligible low value symbol into a coin. Note this doesn’t always create a winning combination! Finally, if you push the chest Scatter into the centre of the reel, you receive five free spins with an increasing multiplier. 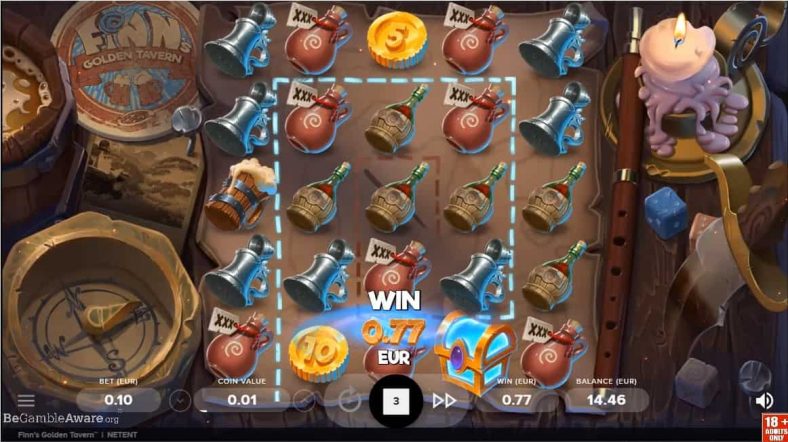 NetEnt is a developer that needs no introduction. They’re the largest player in the iGaming industry, and have been almost since its inception! Nowadays, the developer has a global presence. It has offices in Stockholm, Malta, Kiev, Gibraltar, Poland, London and even in the United States! With over 1000 employees committed to delivering the best games possible, the developer is almost guaranteed to deliver an amazing release every month!

Finn’s Golden Tavern is played on a 5×5 board. Instead of paylines, wins are awarded when three identical icons connect horizontally or vertically. Symbols do not fall top-down like they do in a regular slot. Instead, they follow the spiral pattern you see on the screen. Gamblers can wager between $0.10 and $500 on each spin.

This game uses NetEnt’s new layout, which we’re big fans of. It keeps the transparent look of the old one, but simplifies things like setting your total bet. It still hasn’t dropped coins completely for whatever reason, but it’s a step in the right direction.

Autoplay remains as robust as ever. First, you select the number of auto-spins to be played. Then, you can open the advanced settings menu, where you can adjust various stop conditions. You can set win and loss limits, a single win limit, as well as stop spinning on any win, or if free spins are triggered.

Icon designs are quite detailed, and fit the tavern theme quite nicely. They’re split into golden coins and various types of booze! There’s also a bright cyan chest, which is the Scatter. To use it, you have to push it to the centre of the playing field! The only difference between the multiple coin symbols is the number written on top. Otherwise, their design is exactly the same.

If you get a no-win spin during normal gameplay, there’s a chance Fist Slam will activate. Finn will slam his fist on the table, causing an icon and a coin symbol to flip places. This swap generates a guaranteed three-of-a-kind win.

You can also get one random icon to transform into golden coins. The selected low-value symbols will usually be positioned in the centre itself, or somewhere nearby. Unlike the Fist Slam, this transformation does not always create a winning combination.

Push the chest into the middle of the board, and you receive five free spins. During these extra turns, a multiplier reel is active, which fills for every Wild generated during an Avalanche. Every five steps on the meter increases the multiplier by one.

This NetEnt release has a medium-high volatility and a jackpot worth 2000x your total stake. Finn’s Golden Tavern has an RTP of 96.1%, which is above the current industry average.

Just like its predecessor, it feels a bit weird to play. Whether or not you’ll enjoy it mainly revolves if you can get used to the spiral spins it offers. In all other aspects, we like it better than the 2017 slot. The special features are easier to understand. If we had to nit-pick, we’d just request slightly higher payouts, given the game’s volatility. Apart from that, it’s another slam dunk from NetEnt!