Alongside a number of other classics that we’re seeing on the reels of Fire Joker Freeze, the Jester is a common sight, and one that this game relies heavily on. It’s not a true classic, though it has the setup of one, but the features offered inside are so much more, and the design quality is above average as well.

Fire and Ice Jokers are present in the game, and they can be quite powerful as feature triggers. If we get back to the list of regular symbols, we find a Lucky 7, a Gold Star, Bar logo, Plums, Grapes, Lemons, Cherries, and a Blue X.

More than 260 slot machines are offered by Play n GO, and the developer does quite a bit to give the player a lot of options. They’re expected to launch about 50 new slots in 2021, and as you can see, some are part of the Joker series. There are multiple such slots in their collection so far, so while plenty of their releases will have modern setups and big prizes, there are classics to find there as well. 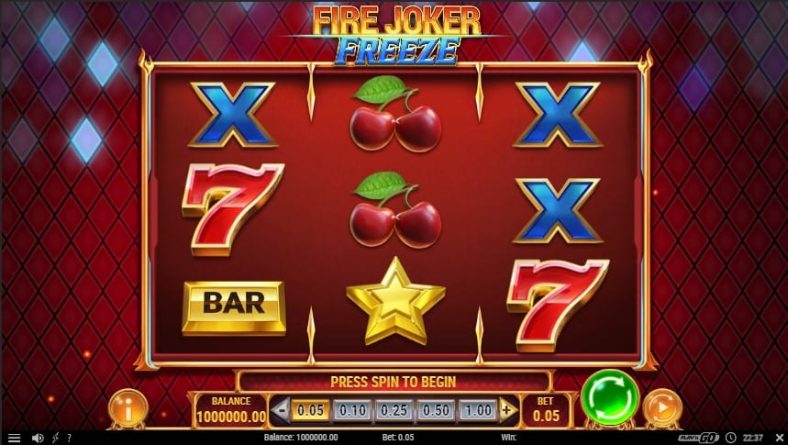 You’re playing with 3×3 reels, and the game area spins with only 5 active lines present. Three matching symbols, landing on the same line, will get you a win.

Both the Fire and the Ice Joker symbols are present here, and they both can be used as wilds when they land. Mix them with a couple of regulars, and they act as substitutes, so that new wins can form that way. With three matching wilds on the same line, a prize worth 10x the stake is paid, as they form their own combinations then.

Should an Ice Joker land, and during a losing round where no combinations are formed, then you get a Re-Spin of Ice out of it. The Ice Joker expands and takes over its reel, while the other reels re-spin.

There is a Re-Spin of Fire as well, but this one requires that you get two stacked symbols which are fully visible, during a losing spin. The re-spin that comes then, will keep the triggering stacked symbols, and will change only the symbols from the remaining reel.

If you get an Ice Joker during a Re-Spin of Fire, then the Wheel of Fire and Ice will trigger and will spin for you. The same can be done when you get three matching stacked symbols to appear on the reels (three Ice Jokers work too).

The purpose of the Wheel, is to spin and give you a multiplier that will apply to wins. It could be as high as 20x. The Wheel gets an upgrade for each Ice Joker present during the triggering spin, or by getting a Snowflake during your spins.

As for the potential of the slot, it’s nowhere near as big as what we expect to see from typical Play n GO slots. 1,000x the stake is not impressive at all for them, though this return is possible in a slot with medium volatility and a Return to Player of 96.18%.

Provided that you’re a fan of classic content, Fire Joker Freeze can scratch that itch for you, though it does it by using a mix of special features that would be difficult to find in this form even in modern 5-reel slots.