A forge where you make gemstones, now that’s an unusual idea, but one that this Play n GO slot machine makes work eventually. Choice of theme aside, we find a common mix of Royals and gemstones among its symbols, so don’t expect much from it visually. There is an extra bonus reel at the top, and that’s one thing making it special.

Forge of Gems gets five Royals initially, from 10 to A of course. They follow up with four gemstones in red, green, orange, and blue, along with a top-paying Diamond Wild (3x the stake per combo).

You will find that the developer of Forge of Gems is one of the biggest names in the online side of the gaming industry. Play n GO creates dozens of new slots each year, likely more than any other developer, and the quality is above average for most of them. It’s impressive, and I’d recommend their portfolio of slots for that reason. 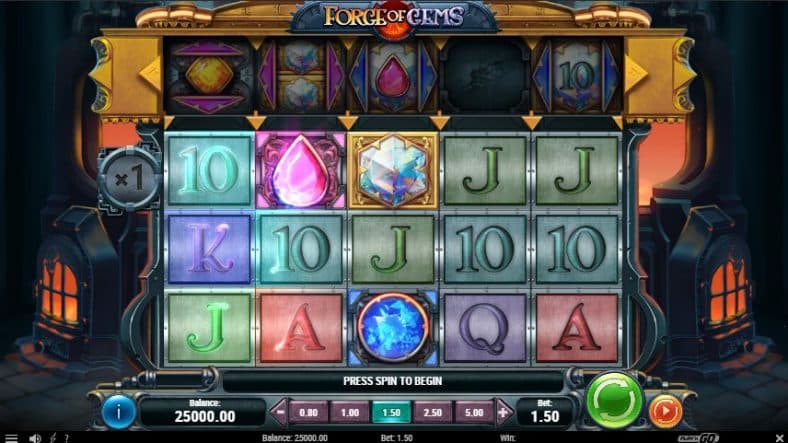 Spending between $0.10 and $100 per spin is allowed, and in exchange the game gives you all its ways to win.

Starting off, you have 243 ways to win, from 5×3 reels. Thanks to splitting symbols, you could give that game area a serious boost. At most, you could have up to 36,288 ways active. A winning combo is formed via 3-5 symbols appearing left to right, on adjacent reels.

First of all, let’s take a look at the Diamond Wild. It’s the symbol which is going to be used in any new regular combo formed through its reel, and it will be a substitute for that symbol. Ideally, you want wilds on all reels, forming combinations of the highest value possible (up to 3x the stake paid per such combo).

After you’ve formed any sort of win, the cascading reels come next. Winning symbols drop down, and others are brought to the reels, so that more combinations can form.

Of particular interest should be the Forge Reel you see at the top, where modifier symbols appear. Once cascades trigger, the special symbols from the Forge Reel will be dropped down. The various modifiers available include:

The final feature is the Gembox, which you trigger by collecting Red Jewels from the reels. You need 3 or more in a single round, collected across cascades even, and you get a prize and free spins. Depending on the number of scatters, 3 to 5 being needed, you get 20x to 40x the stake as a prize, plus 8 to 20 free spins. For the free spins, the advantage mostly comes from the ever increasing multipliers, which never reset while the feature goes on.

I like what they’re doing with the top payouts as well. Forge of Gems can pay 20,000x the stake, and the game has a mix of high volatility and a 96.20% RTP, which I appreciated.

Forge of Gems looks fine, if you care about having unique features, good rewards, and a decent RTP. Don’t expect it to also deliver a good story or the same high quality graphics that we’ve seen in other Play n Go slots.