One of the most famous stories from the Arabian Nights is the tale of Ali Baba and his forty thieves. There isn’t a person in the world that heard the story and did not want to try to open the entrance of a cave with the password Open Sesame.

Well, thanks to Play’n Go, you will now have a chance to enter the den of thieves and pocket up to 10,000 times the bet in a single spin. Fortunes of Ali Baba is a five-reel video slot that benefits from 20 fixed paylines and offers a couple of rewarding additional features, including the Den of Thieves Bonus and the Free Spins feature. 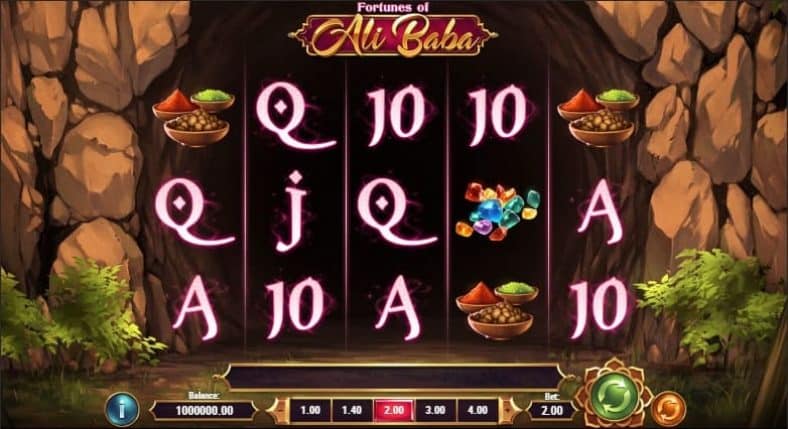 Play’n Go appeared in the iGaming industry back in 1997, but started working independently in 2005. Even so, their catalog is not as big as the ones coming from other industry giants like Microgaming and NetEnt.

Around 150 online casinos offer Play’n Go titles now, but the number of casinos is growing constantly. About 100 video slots are on the offer, with the best ones being Wizard of Gems, Gemix, Aztec Princess, and, one of the newest, Hugo.

Once you start spinning the reels, you will find yourselves in front of the Den of Thieves, the famous cave where Ali Baba and his bandits hide their vast treasures. Ali Baba himself is used as a Wild that substitutes for all regular icons. Another Wild will be available only during the Free Spins feature, and it is the Thieves Wild.

Ali Baba’s Dagger is the highest-paying regular icon, and there will also be a Necklace, Gemstones and Food and Spices appearing on the screen. Morgiana, the servant of Ali Baba, is the Scatter that triggers the Free Spins feature.

Do not waste time and try to enter the cave by using the password Open Sesame, it will take you more than that. First of all, try to learn everything there is to know about the rules of the game.

The 2020 release features a standard 5×3 reel grid and offers 20 fixed paylines, which pay left to right, starting from the leftmost reel, with three of a kind being the minimum for landing payouts. Every spin will cost you 20 coins, and players can wager from $0.20 to $100 per spin, once they set the desired coin value.

The Den of Thieves Bonus is triggered when Morgiana Scatter lands on reels 1 and 5 at the same time. There are five levels you can pass during the time spent in the cave, by picking from three vases which hide either instant wins or the trigger for the Free Spins feature. Up to 100x the bet can be won here, but there is also the possibility that one of the thieves will catch you and throw you out of the den.

When you get to the Free Spins feature, you will get 8 freebies to begin with. Every two additional Scatters landed during the feature will get you 2 extra free spins. Also, the win multiplier, which starts at 1x, will grow by +1x every time you land two Scatters.

According to our sources, the biggest win players can expect in the Play’n Go title is set at 10,000 times the bet, which can provide you with tasty wins, especially if you set the bet to the max.

Of course, the Free Spins feature is where you can really win big, thanks to the progressive win multiplier, which goes up every time you land two Scatters on the reels. As for the symbols, the ones that pays the most are the Ali Baba Wild and the Thieves Wild, both offering 250 times the bet for five of a kind.

We really love everything offered by the Fortunes of Ali Baba video slot! First, we love the visuals, while the soundtrack is simply excellent.

Second, the special features on the offer are very good, even though it can be very frustrating when you enter the Den of Thieves and do not end up with big wins and the Free Spins feature. Even so, there will be times when you will walk out of the den packed with treasures, just be patient. All fans of action and the Arabian Nights should definitely try the 2020 release.