They’ve gone back to the 70s for the slot’s theme, but this is actually a fairly common choice that developers have been making for a while now. The 70s and the disco clubs of the time are the ones that inspire Funk Master. It’s a large game area, as a Cluster Pays title is supposed to have.

Among its symbols, the images are mostly of disco balls, which have been colored in blue, purple, teal, pink, green, yellow, and orange. A Rainbow Wild has also been included.

Even though it’s been acquired by Red Tiger, NetEnt remains a major developer, which has built up its reputation over 20+ years. One of the pioneers of the online gambling industry, they’ve designed several hundred slot machines over the years. 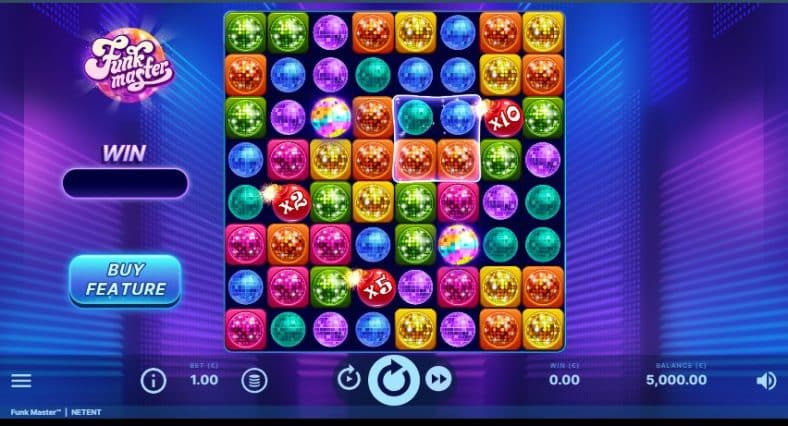 The bets that you get to place in Funk Master will start from a minimum amount of $0.20, but the player could take it up to $200.

The setup uses 8×8 reels, and the engine is a Cluster Pays one. You get paid by forming clusters of matching symbols. You need 6 to 20+ symbols, to get a win, and the higher the number, the better the rewards.

Avalanches are going to follow after any winning clusters that you’re forming. They get rid of the winning symbols, after which new ones drop down, so that additional clusters can be created. If that happens again, then the Avalanche gets triggered once more.

You get some help as well. It’s the Dancing Wild that does that for you, being used as a replacement symbol in whatever clusters are formed next to its position. Before the Avalanche, the Dancing Wild remains on the reels, moving in a location that’s close to the initial one.

There is also the Dancing Wild Hotspot, a location that occupies 2×2 positions. It’s placed in a random spot each round. If you manage to form clusters on all positions of a Hotspot, then the area is unlocked and it gives you 1 Dancing Wild.

You may get Multiplier Symbols as well, and those look at bombs with four possible values on them (2x, 3x, 5x, and 10x). The game boosts all wins from that round by the Multiplier value. With 2+ Multipliers, the values are added up before they’re applied to wins. You don’t get to use them in the formation of clusters though.

If there are at least 3 Dancing Wilds present at the same time, you get 6 free spins from them. The Hotspot area goes to 3×3 for the feature’s duration. You also get to use all Dancing Wilds from the triggering spin, and they become sticky until they’re part of wins.

The free spins have 8×9 reels initially, but you can go up to 8×12 reels by unlocking Dancing Wild Hotspots. The Hotspots are removed once the game area gets to its maximum size.

A top prize of 3,337x the stake is the most that you can win in Funk Master. It sounds like a small prize, particularly if you think of the high volatility of its gameplay. Look out for a Return to Player of 96.04%, that’s the value that is worth using from its possible values.

Funk Master looks like a modern slot machine, but it has that retro vibe that works great for it. I’m not crazy about its payouts, but I do enjoy the action and the many features that were included.