With candy-themed symbols on its reels, Gemix 2 looks very similar to the first game of the series. This slot does get a different image in the background, with an impressive white castle shown floating on the clouds, but otherwise it feels like too little was done to make the sequel stand out.

It’s mostly because the symbols that I’m saying this, and in those positions you’re getting the same gemstones shaped like candy, that we’ve seen before. They come in different shapes (candy, stars, hearts, etc), and in colors like yellow, green, blue, pink, red, purple, etc.

Based in Sweden, Play n GO is one of several excellent developers that got their start in that country. They have been working in this industry since the late 90s, and right now they have well over 200 slot machines, along with a number of other games. They also received several awards in the past, including one for Mobile Supplier of the Year, and then for Casino Supplier as well, both in 2019. 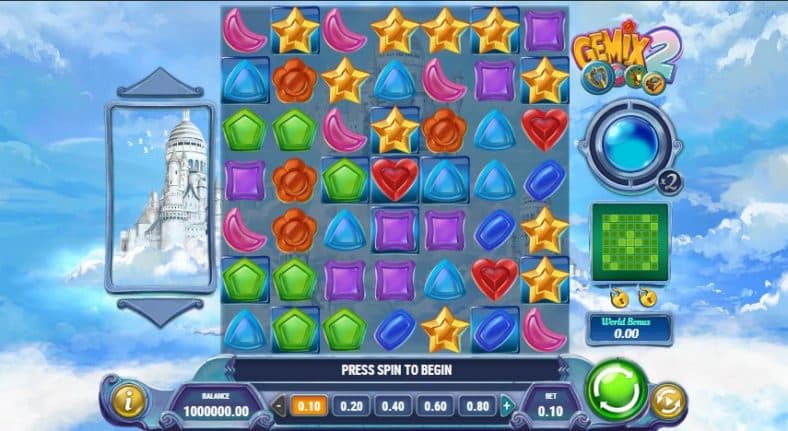 As expected, you just have to pick the wager, and you can start playing. The range of your bets is between $0.20 and $100 for each spin.

Gemix 2 offers 7×7 reels, so 49 symbols are visible at the same time. You use them to form winning clusters of symbols. 5 or more need to be next to each other, touching horizontally/vertically, regardless of the exact reels where this happens.

Once you form a winning cluster, you will notice that there is an Avalanche mechanic in the game as well. This removes winning clusters, and allows a new set of symbols to drop down and replace them. New clusters may form this way, which would trigger even more Avalanches.

As you clear certain positions, forming various patterns behind the symbols, you are going to work towards completing the current world that you’re in, and reach new ones. A picking bonus is activated, where you either get a prize (World Bonus), or nothing.

Wild modifiers are going to trigger as you’re spinning the reels of this one, randomly. Each world does something different here. The Knight adds multiplier wilds that occupy multiple positions (mega wilds). The Miner gives you regular wilds, but there are up to 10 added on the reels. The Princess offers spreading wilds, while the Wizard brings up to 5 wilds that are locked in their positions.

Another big thing to mention about Gemix 2, is its use of the Avalanche mechanic, to collect winning symbols. Once you get enough to charge the Crystal, you get a modifier from the following.

If 50 charges are collected, then you get all modifiers active at the same time, along with a 2x multiplier applied by the wild.

I like the potential of Gemix 2, the slot machine being capable of paying 7,500x the stake. Considering that it’s a game with medium volatility, I’m satisfied with the amount it can pay. The RTP is decent, at 96.20%, but it was even better in the previous slot.

Gemix 2 is not a massive improvement over the original, so its players might be disappointed. The RTP has been reduced, the graphics are largely the same, but it’s still fun to play, if you enjoyed the original.